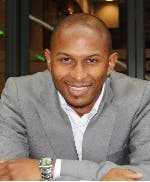 Aspire to inspire before you expire is Nathaniel’s mantra and theme. Be motivated by one of the UK’s most inspirational youth speakers.

This internationally acclaimed & multi award-winning speaker will get your students kickstarted to achieve the best. Nathaniel is serial entrepreneur, pilot, engineer and man of many talents and achievements. His most compelling trait is his dedication to helping young people rise and make a positive difference in their own lives as well as in the lives of others in their community. He is the co-founder of Gennex - an innovative renewable energy company, the Chairman of Jamaicans Inspired UK (Jamaica Diaspora Future Leaders) and is also the CEO of the multiple award-winning enterprise, The Safety Box Youth Services.

In 2007 he was the first double award winner of the Enterprising Young Brits competition. 2008 saw him feature on the BBC’s The Last Millionaire TV series, which took 12 of Britain’s most successful young entrepreneurs and dropped them into six of the world’s most exciting and demanding cities, to make money from scratch in just five days. Nathaniel was very successful and created a business in Egypt starting with only 30 Egyptian pounds that by the end of the week had made a profit of nearly 3,000 Egyptian pounds making him winner for that week. In 2009 Nathaniel was drafted into the Courvoisier Observers Future 500 Next Generation. In 2010 he represented Great Britain as a youth delegate for the G20 Summit (YES) in Canada and was also featured in the under 40’s section of the 2011 JP Morgan / Powerful Media, Black Power List of Britain’s most influential black people.

In 2012 Nathaniel’s business networking skills was mentioned in Sir Richard Branson’s book “Like a Virgin, the secrets they don’t teach you at business school”. In 2013 he was invited to become a Fellow of The Royal Society for the Encouragement of Arts, Manufactures and Commerce, later that year he was awarded the Precious Man of the Year Award and the UN/UPF Youth Achievement Award for his company Gennex. In 2014 Nathaniel became the youngest Trustee to the Ernst and Young Foundation.

As a qualified pilot, engineer, entrepreneur, sports coach, martial arts expert, professional speaker, mentor and academic his life continues to inspire many wishing to further themselves in life.

"I have shared the same platform as a speaker with Nathaniel as well as worked in schools together to inspires students. His passion to empower and encourage people to be the best they can be is infectious. Nathaniel definitely walks his talk and comes highly recommended as an entrepreneur, motivator and professional speaker."

"Nathaniel is one of those incredible entrepreneurs that only come around once in a while, supremely motivated, intelligent and truly inspiring! Whenever I meet people who know Nathaniel they speak incredibly highly of him and his services. His success is nothing short of impressive and I know he's determination will keep leading him to greatness!"

"Nathaniel is a brilliant speaker, passionate, highly motivated and utterly inspiring. He draws from his own experiences which demonstrate perfectly that no limitations should be accepted in any walk of life. Can't recommend him enough!"