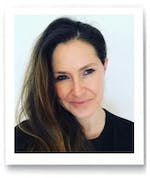 Jo Wimble-Groves is the co-owner of Active Digital, an award-winning mobile telecommunications company. A self-confessed ‘accidental entrepreneur’, Jo put her hand up and took an opportunity to run a business with her brother at just sixteen years old, dropping out of sixth form college at the same time.

Jo regularly spends time visiting schools, colleges and universities to share her story, as well as explaining the power of how many of us learn through failure. Her aim is to inspire the next generation of female entrepreneurs. In March 2019, Jo was one of 100 women to be invited to No.10 Downing Street to meet the Prime Minister on International Women’s Day.

In 2016, Jo created a blog called Guilty Mother, when she struggled with work-life balance and wanted to open the conversation on feelings of ‘mum guilt’. The parenting and lifestyle blog is now followed by over 50,000 people worldwide.

As a writer, Jo’s work has appeared in Huffington Post, InStyle UK, Cosmopolitan and The Guardian. As a brand ambassador, she has worked with Boden, Jaguar Land Rover and currently Neutrogena amongst others. Jo is passionate about creating a world where women have equal rights and that girls can achieve great things.

Her engaged online following amongst parents, her high-profile brand work, her connections to organisations such as Girlguiding UK and her existing speaking network will all play a significant role in supporting the launch and promotion of the forthcoming book “How to Raise a Modern Girl.” The book is due to be published in October 2021.

"I wanted to thank you for delivering such an inspiring and powerful lecture. Without the atmosphere of a live venue and without the opportunity to build a rapport with a physical audience, there is even greater emphasis on each and every word you are saying. Your talk was so engaging and absorbing, so relevant and resonant, and so personal, self-deprecating and humble and this meant that all our audience – from the youngest to the not-quite-so-young, from teenagers to parents – could really relate to you and your messages. The fact that almost without exception the whole audience stayed with us online right until the very end and asked a succession of genuinely insightful, challenging questions shows just how well received it was in homes throughout the county!"

"I worked with Jo as Director at Active Digital and always found her warm and friendly personality made her very approachable and a very effective communicator. Jo’s natural drive and enthusiasm is extremely inspiring to be around and I would choose to work with her again without hesitation."

“We invited Jo to come and speak to the year 12 students at Dartford Grammar School. The students really appreciated the talk today.”

"Thank you for your visit this morning. I had some very positive feedback from staff and pupils, so you definitely left with a buzz about the place. I really appreciate you finding the time to come and talk to us all today. It’s very much appreciated."

– Helen Hoffmann, Head of Derwent Lodge, The Schools at Somerhill

"Thank you for speaking yesterday at our Women's Enterprise Kent event. We really enjoyed your talk, it was very motivational and inspiring."

"Jo is the epitome of a successful young entrepreneur. She is clearly knowledgeable, hardworking, well organised and focused. But for those who think to be successful you have to be bull headed, arrogant, greedy and pushy - Jo is none of these. She is always pleasant, helpful, and mindful of needs of others - including staff and great fun. Jo makes others feel good!"