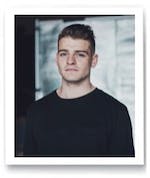 Those things that seem bigger than you, better than you, or that could be the end of you, don’t have to stop you from stepping into the future of you.

Jake led the Schools Project from 2017-2021, visiting over 80 schools and reaching over 35,000 students across London and the UK. As one of the speaking team, he would deliver workshops and assembly programs aimed at helping young people take a positive next step into their future.

Between home life and school life, young people face challenges that they may never get the opportunity to address. Jake's talks aim to open up the conversation on topics such as; character, fear, courage, future, mental health, identity; speaking about these things in an engaging and relevant way.

Young people today, like all of us, can be influenced by so many things; the programs we watch, the teams we support, the music we listen to, the people we spend time with. Influence is defined as “the capacity to have an effect on the character, development, or behaviour of someone” and it is something we all have.

Jake wants to help young people understand the influence they have and recognise opportunities to use it to have a positive impact in their school, at home, and in society.

"Jake always comes with a fantastic and well organised presentation. He has a unique ability to engage the students and keep their interest and attention throughout, even using audience participation to ensure everyone leaves on a high. He speaks with confidence and passion, which the staff and students thoroughly enjoy. When he visits, he always kicks off the morning with such a positive, encouraging and powerful message, changes the game for the whole week. #CHANGINGYOUNGLIVES #EMPOWERINGTHENEXTGENERATION"

“Jake’s ability to speak to our students at their level makes his talks really relevant. The students like his honesty and clear approach to some deep topics.”

“Jake leads our sixth form assemblies on a regular basis, tackling some of the more tricky issues of life such as future, hope, fear and identity with compassion, truth and sensitivity. His presentations are relevant, and are delivered in an inclusive manner which impact the lives of the students in a positive way.”