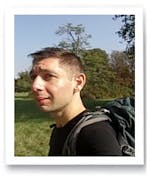 Ian is an adventurer, award-winning travel writer, and events speaker. He has spoken to large and enthusiastic audiences including school year groups, university societies, and travel clubs across the UK about the trials and tribulations of his exciting life of adventure. He has spoken twice at the Royal Geographical Society’s London headquarters, and been published in a variety of books and magazines, including The Metro and two Bradt travel anthologies.

Ian gave up a life as a medical researcher to explore the forgotten corners and stories of the world. Starting big, his first major adventure was his Encircle Africa expedition. The first solo and unassisted circumnavigation of Africa by public transport, it was a 13 month, 25,000 mile overland circumnavigation through 31 nations that saw him live life without timetables. He rode beaten-up bush taxis, flatbed trucks, leaking dugout canoes and a van delivering freshly-made meat pies to cover a distance equivalent to circling the earth at the equator.

Entirely reliant on Africa’s local populations, he fought off thieves in Senegal, was mistaken for an undercover UN agent in Liberia, refused entry into the Congo, and while in Sudan becomes perhaps the only person teargassed while trying to visit a museum.

Since then Ian has travelled the length of the Sri Lanka’s longest river, walked the coast of the Isle of Man and the length of Hadrian’s Wall, and travelled through Scandinavia using only a 1960s guidebook. Retracing the steps of his great uncle during World War II was his most recent adventure, retaking the photographs he returned with.

"We hosted Ian Packham for a sixth form lecture this week and he was absolutely brilliant! His talk was utterly enthralling and encouraged the youngsters to challenge their pre-conceptions of Africa as a rather inhospitable and lawless continent. A number of the pupils spoke to me afterwards saying how much they had enjoyed Ian’s talk and looked forward to hearing about his next adventure."

"Ian delivered an excellent and engaging lecture that was thought-provoking and looked to dispel some of the ignorances held about Africa. We look forward to welcoming him back to Repton in the future."

"We were so glad to have you come and speak to us the other day...We were all inspired"