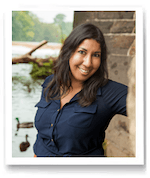 Speaker, writer and lobbyist for social impact and inclusion

In 2014, Anj's life changed when she was introduced to Afusat Saliu and her two little daughters. She led a high-profile campaign on their claim for asylum based on the risk of Female Genital Mutilation to the little girls in Nigeria.

Anj pulled together a top legal team and started a Change.org petition which gathered 128,000 signatures. The campaign attracted attention from the global media, MPs and even personalities such as Richard Branson! Unfortunately, the family were eventually deported, but her fundraising campaign through a local charity secured their accommodation and schooling for a full year. Anj learned that by gathering professional, motivated people together, it’s possible to make an impact on the lives of others on a massive scale.

Anj's experiences showed her what she is capable of and brought her into contact with influential and inspirational people from around the world. Possibilities she couldn’t have dreamt of opened up. Anj wants the same for others. In her talks, she teaches the personal and professional lessons that she developed through leading a high-profile legal and media campaign to inspire others to make change in themselves, their communities and in the wider world.

Recent talks include the opening keynote at the Chartered Management Institute IWD18 conference, the closing plenary at the Institute of Fundraising Yorkshire conference, the Charity Retail Association Annual Conference and moderator for Disorienting Race, Carnegie School of Education.

As a professional lobbyist of over 15 years, Anj has a wealth of experience of social impact and inclusion to share with your audience. She has spoken in the UK and abroad, in venues as diverse at The House of Commons and the Palace in Brussels.

Audiences have been as intimate as 35 and as large as 400. Her talks focus on three key areas of leadership and can be tailored to your objectives. These are:

“Anj, thank you so much for such a wonderful, rewarding, engaging day. I really appreciate you taking your time and effort to provide such an inspirational day…NCS cannot thank you enough for your support in helping to ‘challenge’ a young person.”

“We were delighted to have Anj speak at our event, and her presentation went down a storm! She was articulate, funny, emotive and thought provoking - not easy to do in the time we gave her! I would highly recommend Anj to speak at your event, or if you're looking for help in improving your presentation skills. I have nothing but praise for her approach and her style.”