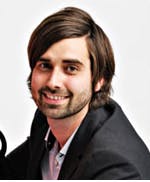 From idea to production - Ross’s journey of bringing his ideas to life has been full of huge successes and epic failures so far.

Ross’s product, a one-person launch electric watercraft for lifeguards, is a first response water craft, it can be picked up and launched quickly by one lifeguard, who can speed through the surf to reach people quickly.

He has come a long way since making the first prototype in a tent in his garden (much to the annoyance of neighbour Margaret) whilst at University. Now at production level, development of the water craft has taken Ross on adventures around the world.

From filming with the Bondi Rescue Lifeguards in Australia with Richard Branson’s help, to interviews with the BBC and CNN, whilst treading water in a cold lake! Ross loves the journey he is on, bringing his product to market, and equally enjoys sharing this.

He has no business training and has learnt how to set up a business on the job, often learning through failing at things first. He launched his business as a finalist on the BBC3 TV show ‘Be Your Own Boss’, where he successfully pitched to Richard Reed, co founder of Innocent Smoothies, who invested seed funding.

His watercraft has since been tested with over one hundred lifeguards along the East Coast of Australia with Virgin’s sponsorship, and will be in production this summer. Asap water crafts are also working on a leisure water craft.

He loves sharing this journey and talking to students about failure - how to transform failure into success. He also runs innovation workshops. These workshops equip students with everything they need to come up with awesome ideas - then develop and grow their ideas to add value/credit to them, or turn them into businesses.

Asap water crafts were named the Lloyds TSB Best UK Start Up in 2013. Ross has since gone on to win a Grand Idea award from Shell, an Entrepreneurship award from Santander, Start Up Entrepreneur of the Year Silver at the Great British Entrepreneur Awards 2014 and has recently been named by The Design Council as One to Watch.

“I just wanted to send you an email to let you know how fabulous your speech was yesterday and to thank you again for giving up your time. The feedback from your speech was outstanding and everyone was gushing with enthusiasm for how inspiring your story was/is. You really did deliver on all levels – professional, inspiring, engaging and I am fully confident that you would have made a significant impact on the lives of many students within the room last night.”

“I am writing to formally thank you for kindly delivering a most appropriate and entertaining insight into the world of a current young entrepreneur at the Leicestershire County Final. Your contribution has added significantly to this value and I look forward to continuing to work together on the delivery of Young Enterprise programmes in the future.”