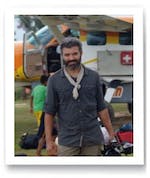 Reza Pakravan is an explorer, filmmaker and writer. He is a fellow of the Royal Geographical Society and a recipient of the Explorer Award from the Scientific Exploration Society. He has presented and produced documentaries for the BBC, Channel 4, Fox and CBC. Reza’s work has featured in publications including the Guardian, the Independent, Metro, NationalGeographic and Wanderlust. Reza is an advocate for diversity and inclusion in adventure travel.

He recently completed his epic journey to become the first person in modern history to have successfully travelled the full width of Africa from West to East via the Sahel region, documenting the impact of environmental issues on the lives of indigenous people. The Sahel is where climate change has hit the hardest, and where global warming has contributed to the greatest human migration ever witnessed on the planet. The journey was followed by his UK theatre tour – Africa’s Forgotten Frontier – in association with the Royal Geographical Society. In this high-energy, adventure-packed talk, Reza unearths issues linked to climate-related migration and the impact that desertification has on the lives of the indigenous people who call the Sahel their home.

Reza’s constant thirst for adventure has earned him the Guinness World Record for crossing the Sahara Desert by bicycle. Pushing his ultra-endurance limits further, he cycled the 11,000-mile length of the planet from north to south in the record time of 102 days.

He is currently a contributor to the Outdoor Journal, Travel Africaand Summitmagazines, and is an honorary member of the Scientific Exploration Society.

He has also produced a short film in association with the Scientific Exploration Society called “The Great Green Hope”. The film is about the Great Green Wall in Africa and the impact of desertification and climate change in the continent. The film was screened at the Royal Geographical Society annual Explore event and has an educational theme. He offers a screening and Q&A to schools.

“Reza is a charismatic speaker who builds a strong connection with his audience from the instant he steps on the stage. His talk was a true inspiration”

"Awe inspiring Reza talks to us about how he followed the crowds as a graduate, but after a few years of high earning and high spending he knew that he needed a way out...find out what steps he took to dramatically change the rest of his life for the better”

“Reza is surely a very passionate and genuine speaker. His delivery which revolved around challenging conventions in creating a legacy was indeed very motivating.”

"The talk you gave was absolutely brilliant. The students have not stopped talking about it yet"

“A real story of courage and inspiration. One of the greatest motivational speeches we have ever heard.”

“Reza’s talk was brilliant – both educational and entertaining. I have never had so much positive feedback from parents”

"Reza was incredibly professional, speaking over the phone to clarify what we wanted in advance and checking the appropriateness of some videos. We have regular weekly speakers and Reza was one of the very best, I would have absolutely no reservation in wholeheartedly recommending him and very much hope he will come back and talk to us again."