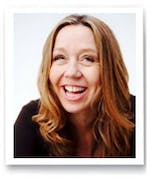 Lou is a very warm, engaging and authentic fun and inspiring speaker who talks openly about her own mental health challenges and addictions whilst having worked in the most exciting industries; fashion, radio and rehab.

Lou Lebentz was born in London and nearly died in child birth, and then again 3 times before the age of 10. Her mother was a Barnados kid and Lou very early on learnt to look after people and to make them happy above and over herself.

Lou initially wanted to be an actress so she went to drama school until her parents rather dastardly divorced when she then ended up working for Sir Philip Green (Littlewoods) and entering the rag trade, because mistakenly she just wanted to earn a lot of money!

During her spell in the fashion industry she was spiked with LSD and ended up in a psychiatric hospital with psychosis, where she was medicated out of it but lost 6 months of her life and was very unwell. It was a massive turning point, as she changed careers and began working for Capital Radio and running all the live concerts and events and even doing an on-air presentation with Chris Tarrant and other DJ's like Scott Mills. However, one day she received an emotional phone call from her mother asking Lou to rescue her from her alcoholic stepfather who had relapsed on the bottle up a mountain in Italy.

Four years later, with many Italian sagas and her stepfather and mother having split, Lou made it back to the UK and trained as an Addictions Therapist. She began working for the Priory, a famous rehab in London and was once again working with celebrities but under very different circumstances.

She began to see how success measured by money and fame is an illusion and how many of the people she was working with were not happy despite their position in life. Lou remembered her vision from the previous psychiatric unit when she was a psychotic patient at 24 years, a desire to help others. So Lou conquered her fear of speaking and began training as a motivational speaker to help inspire people to start living their dreams, conquering addictions and self-defeating behaviors but above all believing in themselves.

Lou also has knowledge around the ACE study and adverse childhood experiences - how early trauma impacts children and what they believe about themselves. This involves getting deeper into the root causes of issues rather than dealing with the symptoms.

“Lou was passionate and honest in her talk to our girls. They came away with strategies to keep a more positive frame of mind and appreciated the opportunity to ask questions to someone with Lou's experience.”

"Lou was a superb speaker whose talk was a perfect accompaniment to Lingfield's Mental Health Awareness Week programme. Her engaging style meant that students understanding of how to look after their mental health grew, without it feeling forced. Throughout her talk, she shared her own experiences willingly in order to reinforce her overall message. Students also appreciated the opportunity to speak to her individually at the end of the session, it was clear how Lou's talk had resonated with them."