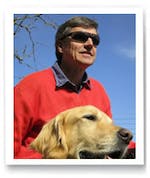 Since becoming blind John Bradshaw has had plenty of opportunity to reflect on what it means to have true courage and humility.

His talks inspire and motivate teachers and students, to think, behave and work differently - ultimately to achieve more. John Bradshaw grew up in Zimbabwe, a country which was involved in a civil war. After finishing school, he was conscripted into the military and volunteered to join a unit defusing land-mines, during that time he was badly injured and is now totally blind.

As a result and unable to opt out of his disabilities, John had to confront his inner-self and therefore embrace patience, courage and persistence.

These qualities, together with his background as a scholar and Headmaster in boarding schools with the highest international standards of academics, sports and culture, bring a unique and refreshing insight into education, drawing on his diverse and powerful set of personal experiences.

Be it short jobs or long careers, the achievement of good school or university results, or the building of successful relationships - they all require a commitment to the process. There is a need to understand personal circumstances - peer pressure, cultural, religious or just life issues, as well as having to manage other external influences that govern our lives.

Over the last year he has given a variety of talks to schools and colleges, for example to Year 8 on Courage (in preparation for senior school) and to Senior Schools, talking to 6th form students on Courage and Humility as they move in to a more complex and challenging environment. He has spoken at staff/teacher forums and conferences, discussing the challenge of leadership in the classroom. And there are many more.

John holds a PhD in Artificial Intelligence from the University of Cambridge. He taught university level Computer Science for 11 years and at the same time managed the residence housing 220 undergraduates. From 2003, he was Headmaster at two independent boarding schools for pupils aged 12-18.

John has been a lifelong committed Christian and has given many inspiring Christian talks, mostly in schools, but also in a wide variety of other settings. He discusses his faith with plenty of humour but deals directly with the issues of the day. He has touched many lives with these talks.

He is married with two children and lives in Sherborne, North Dorset.

"The talk went very well and was very well received by our students. They had lots of questions."

"You brought a huge amount of wisdom, compassion and humour to the conference and everyone will remember your exhortation to be generous when in doubt. Your very personal reflections on your experiences and how you overcame adversity were truly inspiring and complemented the Growth Mindset theme which underpinned the conference. It is important to remind ourselves from time to time why we entered the teaching profession and how each and every interaction with a pupil can make a difference."

"John spoke at one of our evening Chapel services. He spoke with confidence, presence and from the outset the congregation were gripped by what he had to say; they were also enthralled by his guide dog Sabre. John delivered a powerful message that was accessible across the wide age range of our School. It was a truly motivating and moving experience and many of our students commented on how much they have been moved by his message. I would highly recommend him to anyone as a truly inspirational speaker."

"What do we mean by courage? Is it joining the Bomb disposal squad, or is it the outlook you take from your hospital bed when a device exploded in front of you? In a deeply moving assembly, John spoke to us about what true courage and humility are like. Sometimes poignant, sometimes humours, but always from the heart, John spoke to students as though speaking directly to each of them as individuals with a simple and challenging message for their lives."