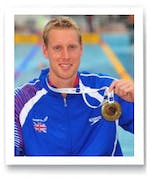 Joe's swimming career began when his parents took him to his first ‘learn to swim classes’ so that he could be safe in the water. Joe was immediately in his element and went on to join his local club, Rotherham Metro.

Showing a natural talent for hard work and a passion for swimming from an early age, Joe rapidly progressed through the club levels and went on to continue his swimming career at Loughborough University at the age of 18.

Three years later, Joe made his senior international debut at the long course (50m) European Championships in Hungary, where he competed in the 200m and 400m individual medley, as well as the 200m butterfly. From then on, Joe represented Great Britain throughout his career, amassing a total of 21 national medals, as well as being crowned British champion 10 times between 2005 and 2014.

He is immensely proud of all his achievements in the pool but among the best were his European Championship medals – achieved in 2010 and 2011 – and becoming a double Commonwealth silver medallist in 2010.

Joe also qualified and competed at three World Championships from 2008 to 2011 and still holds the British record for short course 200m butterfly as well as the Commonwealth record for the 400m individual medley short course.

In 2012 Joe was the only British swimmer to qualify for three individual events at the London Olympics, after winning two events at the Olympic trials. This was a huge achievement and highlight of his career, allowing him to compete on the largest sporting platform in the world, with millions watching on live television as well as the 17,500 fans in the Olympic Stadium.

Since stopping international competition, Joe has been inducted into the South Yorkshire Sport Hall of Fame, which has seen him become an ambassador for promoting sporting excellence in Yorkshire and carries out a similar role as an Athlete Mentor.

“Hard work and self-belief were the key to my sporting success. I have now developed a passion for assisting others in achieving their goals, and through my roles as an athlete mentor, I aim to help young people unlock their potential,” he said.

"I just wanted to thank you for coming into Charnwood College yesterday, I really appreciate all of your hard work with our students. It was an absolutely fantastic day and you were so good with all of the different age groups of students. Students had a great day and I could see a real improvement throughout the sessions. You have really inspired our students to swim and given them motivation for the summer cup."

"It was a pleasure to have you at the academy and can honestly say it was one of the best athlete visits we've had. The students had an unbelievable time, learnt a lot and it has inspired them, so thank you. If we are offered the chance to have you again we will definitely take up on that offer."

"I just wanted to email to say thank you for the amazing visit from Joe Roebuck this morning. It was so inspiring for all of the children to hear what Joe's career has entailed of and how hard he has had to work to achieve all of the things he has done. Joe had a brilliant manner with the children which resulted in them participating throughout the assembly and asking suitable questions at the end of it. It really was inspiring to have Joe come in to our school today and I know both the children, and the adults, have benefited from listening to such an inspiring story."