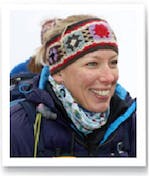 From a shy, risk-averse no-sayer to a high altitude go-getter, Jo never even wanted to climb a hill and now she's climbed Everest. Anything is possible.

Jo Bradshaw embarked on her first challenge in 2004, cycling 500km in Peru for Asthma UK. Little did she know that it would change her life.

At the time she was a Business Advisor for Business Link in Buckinghamshire, living a very normal and safe life - but over the next 3 years she took part in another 2 cycle challenges, finally being offered a role as challenge crew by Discover Adventure (DA), which she did during her annual leave. In late 2007 DA offered her a job in their offices in Salisbury running the Open Challenges and life since then has never been the same. Jo moved the 120 miles from Bucks to Wiltshire in early 2008, halving her salary, selling her fancy car, renting out her house and went from suits and boots to jeans and walking boots.

Jo worked at DA for 2 years, leading many a trip over and above the office work, gaining invaluable experience. The office job was getting too busy to allow her out and about so she left the safety of a regular income and went freelance in 2010, gaining her Mountain Leader qualification and headed off to the hills.

Since then she has led 30 expeditions on Kilimanjaro along with numerous expeditions on foot, 2 wheels or horseback, most at high altitude, all around the world with both charity and private clients. She has also led 4 schools’ expeditions in India and Tanzania. In the UK Jo teaches and assesses the expedition element of the Duke of Edinburgh’s Award from Bronze through to Gold as well as leading many a challenge on bike and foot in the UK and Europe. Jo also helps delivery corporate team building events and expedition training weekends.

Jo never thought she would summit Snowdon even once so becoming the 3rd British woman to reach the true summit of Manaslu, the world’s 8th highest mountain at 8163m in September 2013, was huge achievement. She has gone from having severe vertigo and a great ability to saying no to conquering her fears, saying yes more and turning her life around. She is now on route to completing The 7 Summits and continues to fundraise for charity Place2Be.

"Jo Bradshaw has spoken at two national DofE Events recently and Jo inspired our Gold Award holders with stories of her amazing adventures of climbing Everest and other adventures. Jo was motivational and engaged significantly with the audience. We would be thrilled to have her back to speak at future events and would highly recommend her for speaking and inspiring young people."

"Jo joined us at our Speech Day, with short notice, and provided us with an insight into the world of a freelance expedition leader and outdoor instructor. Her speech was enticing and inspirational, and we very much enjoyed listening to her experience of her mountain expeditions, in particular, her challenging situations such as being on Mount Everest during the earthquake."

"Jo has spoken twice in our Year 6 Geography class when we have been studying mountains. The children really enjoyed hearing about her experiences and asking her (a lot of!) questions. I could tell from our discussion after each session that she has inspired them. One of the parents came to see me this morning and told me her son got home and straightaway started telling her everything he had remembered from the afternoon!"

"Jo was very approachable and did a very appropriate speech, fitted the bill perfectly, thank you."