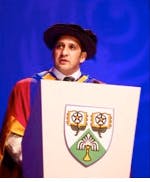 Ikram Butt made history by becoming the first British Muslim to represent England at either code of rugby, dispelling the myth that physical sports do not appeal to those of Asian heritage. Ikram has risen to become an iconic role model on the international stage, especially in the Asian and Muslim community, inspiring a generation of young people to overcome prejudice and pursue their dreams. Whilst being a captain on the field, since retiring from professional rugby he has gone on to be an even greater leader, becoming a widely known, highly praised and greatly admired community figurehead and charity ambassador.

Ikram set up the South Asia Bulls and the British Asian Rugby Association (BARA), with the aim of encouraging more young people, particularly Asians, to participate in sport and benefit from the values it instils. As a result of its success, he has become a regular visitor to the House of Commons, a pioneer of development work in the UK and abroad, and is recognised as one of the most influential Asian role models in the country. In addition to spearheading BARA, he has become an outstanding ambassador for White Ribbon UK, Moonlight Trust, ‘Kick It Out’ Staying Put, British Asian Trust and Mosaic, the latter being founded by HRH Prince Charles. These roles have seen him organise, host and present events at the Houses of Parliament; deliver a presentation to the All Party Parliamentary Rugby League Group about his sporting initiatives; and has been invited to speak about the need for sport towards community cohesion, forming part of a UK delegation to Spain led by HRH The Prince of Wales.

Ikram has become an enthusiastic and inspirational public speaker. Overcoming challenging hurdles throughout his childhood and professional career, he has the tools to inform his audience on a range of areas including adversity, success, performance and teamwork. He has the unique ability to inspire confidence, courage and hope on any platform through his own inspirational story. Ikram therefore reaches out to a wide range of audiences from school children to professional and corporate networks.

Ikram has been featured in a publication named ‘Did You Know?’, a resource book targeting educational establishments highlighting the significant contributions made to British society by ten past and present, black and Asian role models, which was launched at the House of Lords.

Today, as a social activist, he is actively involved in speaking out for those who face oppression in all its forms, he campaigns to end male violence against women and girls, whilst helping refugees at home and abroad. His impressive autobiography, ‘Tries and Prejudice,’ has carried his motivating story to thousands more, making him a champion of community integration and a leading light in the struggle to break down social and cultural barriers. Correspondent Andy Wilson of the 'Guardian' newspaper described it as, ‘an autobiography which is fascinating and inspiring’.

As a result of his tireless work ethic and dedication to inspirational values, Ikram has been highly decorated and accredited. In 2011, he was awarded an Honorary Doctorate in Sport Science by Leeds Becketts University for his services to Community Sports Development in the UK and abroad. Awarded in 2016 with an Honorary Fellowship by Bradford College towards Professional Sport, Community Development and his contribution to charitable work. He has been acknowledged at the British Muslim Honours ceremony at the House of Lords, has won The Muslim News Awards and the Power 100 Awards to name a few.

"The talk went well. Thank you. Ikram came with two PPTs, one for students to view as they settle and one for his talk. He was well prepared and the talk was inspiring. He based his talk on the theme we advised and gave so much more."

"Ikram Butt is inspirational. He should be compulsory listening for every student"

"Ikram's presentation was moving and inspirational. The perfect motivational speech for our students."

Ikram Butt is a fantastic role model for all our students and staff members. He is such an inspiration and his speech was excellent.