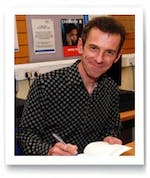 A Solo Walk Across Africa

Lecturer and author Fran Sandham walked across Africa solo from coast to coast, from Namibia's Atlantic Coast to the Indian Ocean near Zanzibar. This three-thousand mile journey was the first time on record anyone has crossed Africa solo entirely on foot by this route.

A very experienced speaker with many glowing testimonials, Fran’s talks at schools have combined an uplifting, humorous and very personal account of this journey with issues of inspiration, motivation, achievement, setting goals, overcoming obstacles, and travel writing itself.

As well as talks at schools and colleges Fran has given well over 400 lectures in recent years across the UK and abroad at literary festivals, geographical and lecture societies, at U3As and Probus clubs, and at high-profile events such as the Sunday Times Literary Festival at Oxford University and the Times Destinations Travel Show at the Earls Court Exhibition Centre. He has lectured on travel writing at the University of Winchester (Winchester Writers' Conference), and also been a guest on over thirty national and regional radio stations including Radio 4's 'Excess Baggage' programme and Radio 5 Live.

Fran is the author of the critically-acclaimed non-fiction book 'Traversa: A Solo Walk Across Africa from the Skeleton Coast to the Indian Ocean', which was serialized in the Sunday Times. As a freelance author he has written for many newspapers, magazines and travel publications in the UK and abroad, including the Daily Telegraph, Observer and Financial Times.

Fran was an editor at Rough Guides for several years, and worked in bookselling and in the voluntary sector before that. He has travelled in over fifty countries.

He also gives lectures on exploration in history.

"Fran gave a great, riveting lecture and the audience was spellbound. He is a wonderful communicator and really knows how to tell a story and hold everyone’s attention. There was not a sound in the whole room while he was speaking: we could have listened to him all night, and we will certainly be asking him back in the near future."

"A brilliant talk – Fran Sandham was amazing in his delivery of his story of trekking solo across Africa. All parents and students in the room were spellbound by the account of his adventures and I would have no hesitation in recommending Fran to other schools or organisations."

"Fran is a gripping speaker and I was quickly drawn into his story. To have adolescents sitting absolutely rapt is a gift that many speakers cannot claim; Fran can: the lads were fascinated by his account of African travel at the sharp end. His talk was vivid and packed with sensory detail to bring it all home to the listener. It was the kind of talk that one comes back to time and again in the days afterwards."