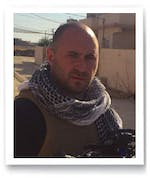 Emile Ghessen served in the Royal Marines for 12 years. During his service he saw action in Afghanistan and Iraq, worked as a recruit instructor and travelled the world. Leaving the Corps in 2012, at the rank of Sgt, he went on to work as a body guard for high profile clients as well as working on commercial shipping protecting ships from Somalian pirates in the Indian Ocean.

With ISIS dominating the news, Emile being half Syrian and with his family still in Syria, he decided to buy a camera and head out to Iraq and Syria to film the situation on the frontline as he sees it. Emile was advised not to travel to a war zone on his own but he went anyway. he landed in Iraq and made his way to the frontline in a taxi.

Since Emile’s first visit to the region, he has built up a strong network of contacts. He has been in and out of Iraq, Syria and went undercover dressed as a soldier with his camera into Iran. Working alone and often putting his life in the hands of people that he doesn’t know, Emile uses his Royal Marine training to stay safe and alive. He goes to lengths to show what is actually going on in areas that other journalists fear to go. The reason he goes to these places is because he believes mainstream media is biased and doesn’t report the honest facts.

More recently Emile travelled to Turkey and boarded a rubber boat along with 40 other refugees and headed to Europe following their journey. Meeting and interviewing refugees on why they have left their country and take the hazardous journey. With no media training and just a man with a camera, Emile has fallen foul to the dangers of the media. Emile’s main aim is to highlight and explain complex situations in an easy to understand way.

"Emile spent an afternoon talking with students on his experiences. He showed a couple of his short videos and spoke before having a Q&A session. It was excellent to see the level of interest among the students. Emile’s knowledge is outstanding and he has a superb way of explaining what’s going on to children of different ages. The feedback from the students was exceptional and they’ve asked if we can get him back. Fully recommend Emile an admirable speaker."

"Emile is a well-polished public speaker that is full of enthusiasm and passion. He talks about an interesting subject that many have little knowledge about. Emile explains his journey from Royal Marine to documentary maker with great interest. An extremely interesting and honest guy, that everyone gains from listening to his experiences. An inspiration individual".

"Our security & Risk Management Consultant courses feedback from the students has shown that course after course student’s note that Emile’s sessions are by far one of the most interesting and formative. With his open question approach, there is no shortage of interesting questions being bounced around the classroom. His humour, emotion and passion are reflected in his presentation. A fascinating guy that we have return course after course."