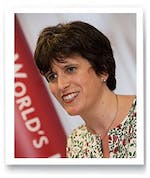 An Award Winning Author - 'The Rubbish-Picker’s Daughter; what I learned from a nine year-old Ashkali girl and some gap year volunteers in Kosovo'.

Elizabeth Gowing worked as a teacher and education consultant in London before moving to Kosovo in 2006. There she learned to speak Albanian, founded the charity, The Ideas Partnership, and met a nine year-old girl from the excluded Ashkali community, who told her that she wanted to go to school.

The apparently simple request led Elizabeth and a growing team of volunteers to help a community transform itself. The Ideas Partnership last year won a European Commission’s prize for its work not only on education but also health, social enterprise and women’s empowerment, and the experiences form the basis of Elizabeth’s fourth book, published in summer 2015.

"Travels in Blood and Honey; becoming a beekeeper in Kosovo" (Signal Books, 2011)

"Edith and I; on the trail of an Edwardian traveller in Kosovo" (Elbow Publishing, 2013)

She is also the translator of several titles from Albanian to English.

"A fascinating and inspiring speaker… I received many warm and enthusiastic comments concerning your address from parents, girls and Governors afterwards."