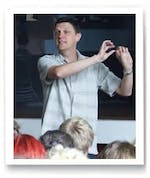 Dave is a comedian and writer who has been inspiring teenagers throughout the UK to create their own opportunities and grasp new ones, in his lively and interactive career/PHSCE presentations. In the past eight years he has visited over 500 schools, sharing his experiences as a stand-up comedian and writer.

In 1991 Dave ditched his day job to do something he really enjoyed - comedy. After making his white-knuckle debut at the Montreal Comedy Festival, he soon became a regular at the Comedy Store, and worked nationwide alongside Rich Hall, Lee Evans, Harry Hill and Peter Kay. This led to writing humorous columns for GQ, The Sunday Times, Boston Herald, various websites and women’s magazines, as well as appearances on TV and radio shows. A career highlight was appearing regularly alongside the mighty John Peel on Radio 4’s 'Home Truths'.

After 22 years on stage and at the keyboard, Dave is now inspiring young people to have a go, to express themselves, grasp new opportunities and to create new ones. Dave is still amazed at where his writing has taken him. In a marketplace where adaptability is everything, Dave is living proof that there is a place for using and developing the skills you already have, to build an enjoyable and meaningful career.

Being creative and embracing an entrepreneurial frame of mind is key, as is taking risks and trying things which are way out of your comfort zone. The idea is to leave young people fired up with a sense of optimism and hope and of course, to have a laugh.

Dave’s lively and engaging humour-writing workshops are perfectly pitched to help students overcome the 'fear of the blank page.'

The purpose of his sessions is to inspire pupils to write, encourage them to believe in their writing, and pass on useful and usable techniques, whilst having a laugh and turning a chore into a pleasure. There has been an enthusiastic response from teachers and students alike. The students are fired up about the various ways you can make a living by being a writer. During the interactive workshops, they are able to use the techniques in their written work

Dave’s sessions usually last between 60 and 90 minutes and work best with normal class sizes, but he's flexible and can tailor them accordingly to fit in with timetables/class sizes. Large groups are fine too. He has worked with all year groups from Year 5 to yr 13, and with all abilities.

The main idea is to leave the students fired up, and with lots of techniques they can use in their own work. He also encourages them to be brave and write with flair. He covers a lot.

It’s important that we have a laugh too, so that they can see writing and enjoyment can occur at the same time!

Dave has visited schools all over the UK, and international schools in Brussels, Rome, Paris and Madrid and is also a member of the National Association of Writers in Education, which required an enhanced disclosure check by the CRB, and has public liability insurance.

"Dave was great thank you. We talked through an outline on the phone and his talk was really well pitched for both parents and students. He struck the right balance of ‘entertainment' and 'serious message' to make the event fun, memorable and complementary to the school’s ethos. Dave was really accommodating and easy to work with too."

"We all thought Dave Smith was excellent. He really inspired the group and made them think; he also filled them with optimism and enthusiasm. A brilliant achievement! I hope he can come again in the future. Well done and thanks!"

"Thank you for your input to the Year 8 Careers Day. The feedback from the girls shows how much they enjoyed, learnt from and were inspired by your talk."

“Thank you very much for coming. You hit just the right tone to keep them amused and engaged.”

“Thank you for coming in last Thursday. The girls were really interested to hear from you and were talking about you all over lunchtime! We would love to have you back in in a couple of years to talk to our next group of year 10s and 11s.”