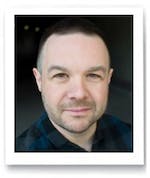 In life you can limit regret by carefully thinking first

Colin Leggo began performing stand-up comedy in 2001 after studying for his degree in ‘Theatre and Performing Arts’ at De Montfort University in Leicester. In November 2004 Colin was rushed to hospital after collapsing during rehearsals for a children’s Christmas show, the fact that he was dressed as an elf didn’t make the ambulance journey any more enjoyable. It transpired that Colin had unknowingly been a Type 1 diabetic for several years and, from a seemingly innocent blister on foot, now had a server infection in his bloodstream.

After a month as an inpatient and many operations later, Colin left hospital feeling lucky to be alive and still have most of his right foot. During the next decade Colin continued to perform stand-up, although often not being able to actually stand, he retrained as a secondary school teacher and even started up his own comedy club in Tooting London. His diabetes and heavily compromised foot were not going to stop him, even though through all this time he had been in a wheelchair, walking on two crutches or in hospital itself having more treatment to his leg.

Then in 2014, after yet another problem with his foot, Colin made the decision to elect to have his lower leg amputated. This decision was one not supported by his surgeon, as on paper Colin’s foot would be ‘healthy’ again after a course of antibiotics. However, for Colin a ‘healthy’ foot did not mean a happy life. He would still have to walk with crutches, not be able to wear everyday shoes and have the fear of returning to hospital with more infections looming over him. So, after an hour long meeting, Colin persuaded his surgeon to perform the operation, removing his right leg below the knee.

From that day on, one he says was “the scariest and happiest” day of his life, Colin has never looked back. His stand-up has become heavily influenced by his life changing decision and the decade of problems and experiences he faced along the way. In 2015 Colin wrote his critically acclaimed one man show ‘Leggoland’ all about his experiences with his leg. The show was a huge success, receiving 5-star reviews at the Edinburgh Festival Fringe and a nomination for ‘Best Newcomer’ at the Leicester Comedy Festival.

In 2017 Colin was invited to talk about his amputation decision at the International Diabetic Foot Conference. He would be the first ever ‘patients voice’ the conference had heard in its 15 year history. His presentation ‘Life After Amputation’ was very well received, as Colin was able to use his many years as a stand-up comedian to mix the seriousness of the story with light-hearted anecdotes and observations, making his talk both informative and entertaining.

What followed were many invites for Colin to attend conferences both nationally and internationally, as a guest speaker and after dinner speaker. In January 2019 Colin was invited to speak in Rome at the International Surgeons Symposium, once again being the first ‘patients voice’ the conference had hosted.

In September 2018 Colin was approached by Colfe’s School in Greenwich to talk at the Sixth Form College as part of their ‘Inspirational Speakers’ programme. His talk ‘Life Changing Decisions and Regret’ focused on making informed decisions, using his experience of electing to lose a leg without regret because he had done the research. When talking to sixth form students, Colin was able to apply this thinking to other events that could ultimately be life altering, whether it’s drug taking, going with someone or choosing a dangerous activity.

Colin’s claim to fame is that, apart from being a part time drama teacher, speaker and performer, he is also the current reigning UK Pun Champion, beating hundreds of punsters to the crown in February 2019.

"A wonderfully powerful and personal talk to our sixth form, delivered with a great deal of humour and natural wit. Colin was able to demonstrate the need to not rush into life changing decisions through his own personal story. It was very cleverly put together".

"It is clear that Colin understands how to connect with a young audience. His talk on 'regret doesn't have to exist' was engaging, thought provoking and highly entertaining. He was able to pitch his unique and personal style of humour perfectly for the age group. The talk when very quickly because of this and created many lively discussions afterwards"

"Colin’s forthright, humorous and very personal account mesmerised our students....He entertained us with his unique and gripping sense of humour...no doubt he will help many other people facing the challenge of life after amputation with his forthright talks”.