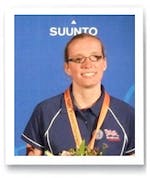 Charlotte has not let being partially sighted stop her achieving in life nor let the bullies get the better of her. Born partially sighted Charlotte achieved excellent grades at mainstream school. Although, Charlotte experienced severe bullying during primary school she went on to develop friendships at secondary school and sixth form that have lasted a lifetime. Despite reservations of many staff members, Charlotte persistently tried various sports including circus performing and self-defence. There is something inside Charlotte that refused to believe that she couldn’t be as good as others and although there were negative views Charlotte chose to focus on those who encouraged her.

Going to the University of York changed Charlotte’s life, not only did she achieve a degree and participate in a diverse range of voluntary activities, but she set about doing many of the sports she had previously been discouraged from trying. As a child Charlotte had been taught not to ‘spoil other children’s fun,’ it was her friends at the trampolining club who taught Charlotte that they would rather that she joined in with games than worry about how well she played the game. University was also where Charlotte took up distance running.

Charlotte started full time work after university and sport was just a hobby. However, in 2008 Charlotte had the opportunity as part of Project Viper to complete the London triathlon for charity. Following this Charlotte was asked to join the disability triathlon squad. This led to a highly successful paratriathlon career, where Charlotte won two World and three European Championships as well as other medals. Charlotte juggled the training, full time work and all the organisation needed for competitions and training. At the end of 2013 Charlotte took the difficult decision to retire from paratriathlon and focus on running, particularly on the marathon, which after a serious injury is an ongoing project.

Charlotte continues to balance her training with her working life. Charlotte has worked in the voluntary sector, for local authorities and in further education providing advice and guidance, mentoring, creating job opportunities and enabling people to achieve their potential.

Charlotte is keen to inspire young people to be the best they can be; to reduce the barriers that people with disabilities face in education, employment and sport; to develop young people’s self-confidence and reduce discrimination or bullying. Charlotte passionately believes that everyone has potential and believes one of the most important things in life is to be kind.

"Charlotte came to Westgarth Primary School as part of a topic focusing on the Olympics. As a former pupil and para-athlete she was an ideal role model for our pupils. She liaised closely with myself prior to coming in and was keen to provide an informative and relevant presentation / activities for the range of children in a primary school. Impressively, she delivered a range of activities for our pupils - an assembly, small class workshops and practical activities. She had clearly thought very carefully about the ages of the children she was working with and adapted the activities accordingly.

There was a good mix of activities – whole class power point presentations, small group practical activities (which the children used bespoke equipment to carry out tasks) and individual interviews with older children. Charlotte was able to engage our pupils very effectively and as a result they produced some high quality work. I would have no hesitation in recommending Charlotte for a role which entails similar duties."

"Charlotte attended my Brownie unit to talk to them about her visual impairment and her success as a tri-athlete. The girls thoroughly enjoyed the night and still talk about it as being one of the best meetings they had taken part in. Charlotte spoke eloquently and in depth about her sight and explained in terms that were easy to understand for the girls aged 7-10 about how this affected her in her day to day and life and her sport. She gave the girls a good insight into the different types of visual impairment and came prepared with goggles so the girls could experience first-hand the differing conditions. One of the stand out experiences was the ‘jingle’ football that Charlotte brought so the girls could experience different games when blindfolded. I cannot recommend Charlotte strongly enough. She is an entertaining and interesting speaker who communicates with people of all ages with ease and confidence."

"Charlotte is a partially-sighted Paratriathlete gold medal winner and was invited to speak at an assembly, attended by both children and parents. Her talk was inspirational, talking about her journey as a partially-sighted person, and then how her interest in sport began. Charlotte has put no obstacles in her way of wanting to become the best she can be. She believes that there are no barriers in working towards your dreams, and she communicated this excellently with the children. The children asked her many questions and she was very comfortable (and patient) answering them all. I would definitely recommend Charlotte as a School Speaker, many parents gave feedback and said how inspired they felt by her gentle encouragement and massive achievements."