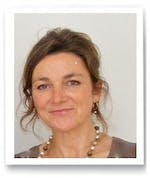 Demonstrating the powerful role the arts can play in rehabilitation

Angela is an inspiring and informative speaker who provides fascinating insights into the usually inaccessible worlds of prisons and Nazi Germany. Her talks offer a deeper understanding of crime and re-offending and demonstrate the powerful role the arts can play in the processes of rehabilitation and reconciliation.

Talk 1 - Crime, Prisons and Offenders – the role the arts can play.

Talk 2 - The other side: The Second World War through the eyes of an ordinary German family.

Angela’s talks are based on her fly-on-the-wall experiences as an artist working in prisons as well as her unusual family heritage as a half-German, with a prominent and decorated General as a grandfather. With extraordinary images and astonishing stories, Angela not only entertains her audiences but challenges attitudes on the themes of guilt, punishment and redemption, which run through her talks. The enthusiasm expressed in so many testimonials bear witness to the success and impact she is having.

Angela’s extraordinary career, started at the age of 21 when she first walked into Long Bay Gaol in Sydney with a portfolio of her murals under her arm. Two weeks later she found herself in front of a 30-foot wall with a motley selection of paints and brushes, two Brazilian coke smugglers, a bank robber and a murderer. ‘I had this overwhelming sense of “This is it!”’ she recalls.

Angela spent the next 20 years working as an artist with prisoners and young offenders in both England and Germany. In similar ways to the process of Restorative Justice, her powerful painting exercises broke down inhibitions and enabled prisoners to experience and address their own offending behaviour. Working unaccompanied in locked rooms with every category of offender, she became a confidante for many prisoners gaining their trust, hearing their stories and encouraging them to make changes in their outlook, attitude and subsequently their daily lives. Her innovative and initially controversial approaches to rehabilitation attracted attention within the Criminal Justice System and in 2002 she became the Arts Coordinator of the internationally recognised Koestler Trust founding the Learning to Learn Through the Arts scheme.

In 2006 Angela’s interest in the subject of “guilt” led her to investigate her German roots and her own sense of being “guilty by association”. Researching the thoughts and actions of her German grandfather, a decorated General in the Wehrmacht who fought on the Eastern Front and was later held prisoner and tried for Nazi war crimes, she discovered just how widely Germans feel an inherited sense of shame for Hitler’s war. The German culture of remembrance and atonement infiltrates every level of society and is expressed in fascinating art forms and memorials, which, unlike traditional memorials honouring heroic people and events, aim to apologise and atone for some of the worst atrocities in recent history.

The aim of Angela’s talks is to present other sides of easily pre-judged topics. Through the use of personal stories from her own life and the lives of those she has worked with, her talks inspire greater openness, questioning and thought encouraging students to re-consider their views on vital topics that affect us all in different ways. They are moving, informative, compassionate, humorous, inspirational, and highly original. All audiences, pupils and adults alike, become engrossed and amazed not only by her insights but by her extraordinary collection of slides that so clearly demonstrate why punishment alone doesn’t work and how art offers a route to true and lasting rehabilitation, personal growth and even forgiveness.

Angela is also a successful artist showing in galleries both nationally and internationally.

"Excellent, thank you! She’s a wonderful speaker. We would love to have her back again."

"A brilliant lecture, the kids were quite bowled over by what Angela had to say about prisons, as was I. The message is very, very interesting, compassionate and utterly relevant. The students' preconceptions about society and the nature of punishment were really challenged and that left people with a real sense of enlightenment concerning the whole issue of effective prisons."

"It's a real lottery as to what you get when you book a speaker for the first time, but Angela's talk was excellent. The delivery was well paced and kept the students fully engaged throughout. She really captured and entertained them with the stories from prison, but left them with some challenging questions about the purpose of punishment."

"Angela's talk was brilliant. The sign of a good talk can be measured by the amount of questions asked at the end and there were a large number of questions. Angela held the attention of everyone in the hall for a full hour. It was a totally unique talk and we have not had anything like it before. A rousing success."

"The boys were still buzzing with the thought-provoking questions raised well after the talk itself. I wholeheartedly recommend Angela as a speaker to those running General studies sessions for the sixth form."