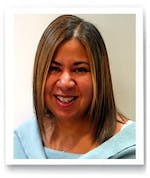 Angela was born in Birmingham to working class immigrant Caribbean parents. She decided at a fairly young age that she wanted to be a journalist despite the objections of her school and the fact that there were very few role models on TV or in print media and she had absolutely no connections in this field.

After getting a few articles printed and working for a local radio station, Angela joined the BBC and has worked steadily in media ever since. She is experienced across the entire spectrum of television production; as a researcher, BBC Drama script editor, single and multi-camera director, producer and executive producer.

Angela is passionate about young people achieving their full potential and going beyond the boundaries of whatever may be limiting their imaginations, creativity and expectations.

As a youth mentor and with her interest in diversity issues and women in the workplace, Angela is in frequent demand to speak to youth groups, particularly those without connections and insights to give them the first rung on the ladder, let alone a long standing career.

Angela has many entertaining stories to tell of the reality of life with celebrities and in the music business and speaks with authority of the resilience and adaptability that is needed for changing work opportunities today.

"Angela was a beacon of unerring positivity, invaluable life knowledge and sound practical advice for my young people on a cold, Peckham evening, and I know for a fact that she lifted their spirits (both intellectually and emotionally) and gave them something tangible to aim for. They were very interested in her story, were immediately engaged by her "tough love", no nonsense, "real talk" approach and were genuinely motivated by her intelligence, wit and human warmth. As a result, they really took to her as someone they could relate to, but also aspire to be like. Her talk was a great success and the ramifications of her inspirational words are still being felt today."

"Angela and I have worked together for over 15 years in the media (BBC and commercial television) and within activities I have produced for schools. Angela inspired many young people in the sessions we set up about career paths in the media, where she was a key speaker. Having a successful career in the media meant that Angela could give 'real world' practical experience, answer difficult questions and give guidance in very lively, positive and informative sessions. Angela has the right temperament and social skills to go beyond celebrity and the 'outsiders' view of the media. She can also bring it down to earth with how these skills help in other jobs or career paths (such as your organisation) or any other industry; as well a life skills and social interaction - skills necessary for raising their quality of life."

"We have found Angela to be an asset to our programs for young people. She has contributed massively with her skills, experience and knowledge where the media industry is concerned and this has translated into informative and tangible actions for the young people we support to follow through on. Angela is zesty and enthusiastic in nature. She has proved to be very effective in influencing our young people to make positive choices and decisions where their future career development in media is concerned. Angela is always punctual and proactive at getting involved in the programs as a guest speaker and presenting the young people with valuable insights and examples of how they can develop with their interest in the Media industry. She has been a supporter of our work for some time now and we are very grateful and appreciative for all of her efforts and contributions. I have no hesitation in recommending Angela and believe she will be an asset to any organisation that develops young people through mentoring and influencing."