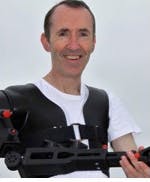 Meet Steven Robinson, a man who knows all about adding inspiration, humour and humility into any situation. Steven has a fantastic story that proves, beyond doubt, that any one of us can leap and bound over the obstacles that stand in our way. We can all find our own route to success regardless of circumstance.

Born and bred in a deprived area of Leeds, Steven grew up with low self-esteem, often picked on by the other children in the neighbourhood. As a teenager, he found an escape in the sport of motocross, learning how to ride dirt bikes through the most treacherous terrain.

At just 18 years of age, all that came to an end when Steven, who is also acutely dyslexic, lost his right arm in a motocross accident. Determined that this would not mean the end of his dreams or a happy life, Steven went on to achieve many great things. He found a scholarship scheme that allowed disadvantaged people to learn how to fly a plane. How was he going to do that with one arm? By designing and building his own prosthetic arm - and that is exactly what he did.

As a business person he has proved himself to be tenacious, inventive and highly successful, having reached the top of his game as a designer and manufacturer of jukeboxes, restorer of “one armed bandits” (an amusing but genuine coincidence) and investing in dozens of properties.

Whereas many of us will avoid the things that we are afraid of, Steven’s mind works in another way. Perhaps this is because he had learned the hard way that when the worst thing happens it can bring out the best in us. He had a deep seated fear of horses so he decided to get into dressage, with one arm!! Not only did he thrive in his new hobby; he has won tournaments.

"Steve was amazing. He was so inspiring and spoke beautifully and humorously about his own experiences. The students really engaged with him, I would highly recommend him."

"The way that Steven approached life after losing his right arm in his late teens, was absolutely inspiring. What a person to have as a role model in how to overcome personal obstacles and fears. Life needs people with the attitude that Steven has. I can easily see why he does inspirational speaking."

“Just a quick note to say how I really enjoyed your talk at yesterday’s Brand Yorkshire event. I recited this back to my three children yesterday, aged 15, 13 and 11, and told them how you took a negative situation and turned it into a positive. I wanted to emphasise the message that anyone can achieve anything they want if they are prepared to work hard and aim high, we need more inspirational people like you. Carry on reaching for new heights and best wishes on the next challenge you set yourself.”

“A story of the human spirits ability to beat the odds.”

"A true inspiration. A truly inspiring story of determination in the face of adversity."