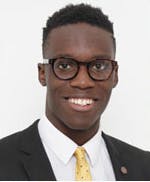 Solomon never had a clear idea of what he wanted to do when he grew up, however, the day he was excluded from school for the fifth time, he saw his mother break down and cry. From that day on, he vowed that he would make her proud as well as make a positive contribution to society.

Despite school exclusions and most debilitating of all - a stutter, which was a cause of bullying and fights during school, Solomon refused to be defined by society. At just 14, starting with the £2 lunch money his mother gave him the following morning, he utilised his adversities to build resilience and tap into his creative entrepreneurial skills, buying confectionary from the local shop and then selling it at school to "fit in" and make a profit.

Soon after, AttireX was born - a vastly growing customised clothing enterprise, now with 20+ employees and a dedicated client base. Now aged 19, he has recently been ranked by City A.M. in the top 100 most powerful entrepreneurs in the UK and maintains an impressive following through various social media platforms! Ian-Sangala uses his experience to be a role model for other young people battling adversity.

Solomon says, "Although my mouth still shapes words that will never be released, I will never let my circumstances define me."

"I engaged Solomon to host and speak about his entrepreneurial background at our first BLP annual awards event. Solomon is a naturally engaging and inspiring individual with the underlying self-assurance who has faced and overcome great personal challenges. His confidence that enables him to interact with people of all levels and backgrounds is tempered by a genuine humility that enables him to reach out and engage with those who are marginalised and disadvantage. His entrepreneurial achievement speaks for itself in terms of his business acumen and his personal journey of overcoming is testimony of his resilience, perseverance and determination to succeed."

"Articulate and inspiring, Solomon is an extraordinary public speaker. Both engaging and energetic, he knows how to grab a room and keep it listening to whatever brilliant message he wishes to deliver. He can quite happily speak on various subjects and be able to deliver a confident and brilliantly executed speech."

"Solomon impressed me from the outset. Both as judge for the Grand Final of Jack Petchey's "Speak Out" Challenge! and as a guest on BBC Radio 5 Midnight Expert he showed himself to be the consummate professional - focused, motivated, proactive and prepared. Solomon is a confident and articulate communicator, who listens as well as he speaks, and he remains modest and discreet despite all of his extraordinary achievements. He shows unusual emotional intelligence and wisdom and this, combined with a natural courtesy, makes him an absolute pleasure to work with. I'm sure his story of success has just begun."