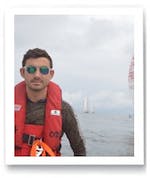 BBC foreign correspondent and travel writer, reporting from some of the most extreme corners of Planet Earth

Simon Parker is a 30-year-old BBC foreign correspondent and Daily Telegraph travel writer, who often reports from in excess of 40 countries a year.

He has sailed and cycled from China to London for a BBC World Service radio series, hitchhiked across Australia and New Zealand, cycled across Southern Africa, Europe, the USA and the Scandinavian Peninsula, and has reported from over half the countries on the planet. He left secondary school with just two (bad) A Levels, but through pure determination, and a desire to travel the planet for a living, he went on to achieve one of the highest ever first-class degrees awarded by The University of Liverpool.

For the past decade Simon has been visiting the summits of the world's highest mountains, the centre of the biggest oceans, the driest deserts and the coldest tundra. He's also reported from major sporting events and breaking news stories.

In his presentation he discusses how each and every one of us must strive to find our own (and best) version or 'normality' - whatever that may be. Granted, that might not be in the shape of sleeping in 150 beds a year and spending up to 10 months out of 12 living on the road, however all of us can work hard to get the best out of the individual lives we create for ourselves.

Travel writer and broadcaster Simon Parker is currently reporting from southern Mexico for the BBC, following assignments to the UAE, Brazil and Argentina already in 2018. Last year he reported from over 30 countries, and this year is shaping up into another busy one. In the next couple of months he'll be reporting for the BBC and The Telegraph from Guatemala, Belize, Honduras, Chile, Alaska and El Salvador, before embarking on his next big expedition - an adventure to rival his 2016 sailing and cycling challenge from China to London, in 133 days, and his recent 2,000 mile cycle of the entire Scandinavian Peninsula.

In October 2018, Simon is heading to the States for the Daily Telegraph to "Cycle Trump's Wall". This 2,500 mile adventure will take him a month and subsequently he plans to tour this around as his next multimedia keynote. It's the first instalment of his new project: News Cycle. Grand adventure cycling expeditions that cast a light on big, topical news stories. On this occasion he'll be shining a light on this geopolitical flashpoint and it will coincide with the release of his new TV show, Earth Cycle, next year.

"Simon gave an insightful and interesting talk to our sixth formers on travel journalism. It proved to be an excellent way to broaden our students’ horizons around travel and life as a hard working journalist. Inspiring stuff."

"Simon came and gave an interesting and inspiring talk to our cultural capital club on his life in travel journalism. It gave the students an insight into the world of writing, but also on the opportunities that travel can bring them. Simon was engaging and the students were able to relate to what he told them – especially that you need to follow your dreams and work hard to get there!"

"Simon is a fantastic young man who has dozens, if not hundreds, of funny and highly interesting anecdotes from a life spent living nomadically as a journalist around the world. Our students relished the chance to ask him about getting into journalism and exploring the planet. A brilliant public speaker accompanied by photos and videos."