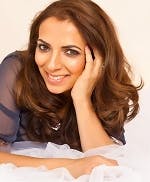 A journalist and author, Puneet Bhandal runs educational yet fun-filled Bollywood-themed creative writing workshops - complete with Bollywood dance lesson. She talks to students about the value of literacy and aims to inspire them – her message is ‘If I can become an author, so can you’.

Puneet was born and bred in West London and was introduced to Bollywood movies at an early age. She found them enchanting and as a teenager, filled her spare time reading film magazines and Bollywood non-fiction. She graduated with an MSc in IT, but decided to try her hand as a journalist. Within six months, she had become a Bollywood film journalist with her own column.

Years later, she decided to use her insight of Bollywood to create a unique and entertaining series of fiction books centred around the Indian film industry. The Bollywood Serie of books are enjoyed by Asians and non-Asians alike, young and old.

Puneet visits schools and libraries, travelling extensively to talk about her books, journalism, Bollywood, publishing and literacy in general. She adapts her sessions according to her audience working with small groups to two year groups in schools.

Puneet focuses on entertainment, but at the same time teaches the value of reading and writing. Her sessions begin with a brief introduction about her work as a journalist and how she developed her own books before moving into a workshop on how to write a book or short story. She talks about plot lines, characters and structure. Puneet continues with advice on publishing as well as starting your own publishing company before finishing with a Bollywood dance workshop where volunteers learn the steps to a Bollywood song and perform as a group.

"It was lovely having you. It was quite clear all the participants really enjoyed the experience, and I hope that the children at Newtown Primary are now getting stuck into the books. Many thanks for a great visit."

"Puneet, Thank you so much for the wonderful workshop that you delivered yesterday. From the feedback, the pupils seemed to enjoy the experience and have taken something valuable away with them. Thanks again, and hope we can have you back in school again sometime."

"Excellent feedback from the pupils and teachers."

"Thank you for a lovely day yesterday. The girls were talking about it all day!"