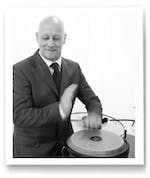 Peter first started playing percussion at the age of 7 and wrote his first compositions for Brass Band at the age of 11. He had his first paid engagement at 13 and the first publication at 20 and he set up his own publishing company in 1981. During his professional career he has experienced the many changes that the music industries have undergone from analogue to online, the opportunities in bands and orchestras of the 1980s to the solo artists of today.

As a performer he has been percussionist with Dame Shirley Bassey’s band for 30 years as well as enjoying a career in session, concert and theatre music. Some of the other artists he has accompanied are Andrea Bocelli, Michael Ball, Michael Crawford, Danny La Rue, Norman Wisdom, Les Dawson, Gene Pitney and Neil Sedaka. He has toured with The Moody Blues and Elvis “The Concert” from Graceland. He has worked with the Max Jaffa, BBC Philharmonic, Opera North and British Philharmonic orchestras. Various television, film, radio and recording credits include: MTV, Stars In Their Eyes, Parkinson, James The Cat, and recording and film projects with Matthew Herbert.

The compositions and arrangements Peter has written include commissions for Wakefield College, the Garnock Academy, Rotherham Music Service and Barnsley Youth Choir. He has arranged for choir and string orchestra, big band, small ensembles (including hours of salon music, some performed on the Royal Yacht Britannia) and percussion groups and to date he has written and published over 650 works.

Music is Peter’s vocation and he is still as enthusiastic and passionate about music as he was 50 years ago.

"Peter delivered a training session for JCI Barnsley that was a key part of our yearly training plan. His delivery style and approach was great for the audience (young professionals ages 18 – 40) and the content was at the right level giving the attendees an engaging and useful training session."

"Peter is an excellent composer often tailoring his own compositions for GCSE and A level student recitals which suited individual pupils’ needs and abilities perfectly. In this respect Peter gave a great deal of his personal time towards the preparation of his students not only for exam work but also for many other public performances within the school calendar, always giving his time freely. The school still uses many of the publications Peter penned during his time here, as classroom teaching resources which are relevant and quite often feature unusual instrumental combinations which work. The Swing Band currently uses a piece in their repertoire arranged by Peter which he donated to the band after a joint venture with the Barnsley College Big Band which he was directing at the time.

Peter is an intelligent and versatile educator who has an excellent understanding of, and passion for, his subject. This was reflected not only in his delivery of stimulating lessons to his students, but also in the many stimulating conversations he had on a weekly basis with myself and other colleagues. His broad range of musical interests and expertise was always evident embracing a variety of modern styles as well as the classics."

"Peter is often at the forefront of innovation, developing new and exciting learning environments. He is a creative-thinker in realising real-world learning experiences within educational contexts. In recognition of this, Peter has received numerous awards from the University of Huddersfield and institutions further afield connected to his national and community work.

His vast experience as a music practitioner and educator informs his core knowledge. He is recognised as an international music percussionist, composer and publisher, regularly touring with international artists. He draws upon his vast subject material to devise ways of imparting this through his teaching practice. By combining theoretical and practical approaches, he is able to offer meaningful learning opportunities to learners of all abilities, both young and old. Peter is all too aware of how age and gender can play a part in differentiated learning and tailors his teaching approaches to make learning opportunities accessible to all"

"Peter did a songwriting workshop for my Level 3 BTEC students last year. It was a day’s activities consisting of an excellent mix of lecture and discussion. It was informative and interesting and it was good for students at this level to experience a taste of Higher Education. The feedback was good and we hope to repeat the exercise in the future".