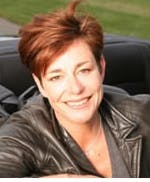 Penny Mallory is one of the most successful women Rally Drivers and the first woman in the world to compete in a World Rally Car (the Formula 1 of Rallying). As a motoring expert, she has presented many high profile TV shows including the hugely successful Channel 4 show ‘Driven’, ‘World Rally Championship’, ‘The Used Car Roadshow’, ‘Accident Blackspots’, Discovery’s ‘Classic Car Club’, and ‘The Road Show’ amongst many others.

As a keynote speaker, Penny has an outstanding reputation, and has worked with many blue chip clients including:

She consults as a Performance Coach with large organisations, world class teams (including Formula 1) and individuals on their attitude, approach and mental performance. Penny also hosts workshops focusing on mental approach, team work, communication and performance.

Penny has an excellent reputation for inspiring people, through speeches, break-out sessions, workshops and her consultancy is in great demand across the UK and Europe.

As a sought-after motivational speaker, Penny shares the ups and downs of her story from 'homeless waster' to 'Rally Champion', inspiring audiences to achieve greater things for themselves. Despite being told she was the ‘wrong sex’ and ‘too old’, she achieved her life long dream of being a Rally Driver. Her unique and inspirational story shows there is no limit to what you can achieve with will determination, focus and commitment.

The story started when Penny was just fourteen. Leaving home and never to return, she found herself in London, seeking a better life, but spent nearly 2 years in homeless hostels. As Penny’s life was by now completely out of control, she realised that she alone could take control of her life, and in time worked her way to becoming a sound engineer and a graphic artist. A chance event allowed her to realise a childhood dream of driving a rally car and she was hooked.

Despite being nearly 16 stone at one point in her life, Penny now takes her physical fitness very seriously and has completed 4 marathons, various hell runners and a Triathlon. She has entered the boxing ring for two fights, one opponent being Monica Galetti! She has also learnt to play polo and completed a successful ascent in 2008 of the tough North face of Europe’s highest mountain, Mount Elbrus, and more recently sumitted Mount Kilimanjiro.

In order to practice what she preaches, every year Penny pushes herself to achieve something she never thought she could. Her self-development book ‘Take Control of Your Life’ has received outstanding reviews, including one from Brian Ashton MBE (England’s Rugby Head Coach), and reached the #2 ranking in two Amazon categories.

Penny is a Master Practitioner in CBT and holds Diplomas in Sports Psychology, Counselling, NLP, Life Coaching and practices as a Performance Coach. She is also the founder of the weight loss product, Malory Band, which has sold like hot cakes around the world.

"Penny came to our school and blew the students away. I have never heard them so quiet! We are so pleased she came to work with the students, and we have already booked her for next year!"

"Listening to and appreciating many motivational speakers is part of my job. I heard Penny Mallory speaking with and engaging year 8 learners recently; it was a large event hosted at Charlton Athletic as part of raising aspirations for learners in Bexley. She was outstanding - one of the best three I have ever heard."

"Your professionalism, sense of humour and unflustered sense of purpose shone through during the day. We would thoroughly recommend you to anyone seeking to raise the aspirations of teenagers."