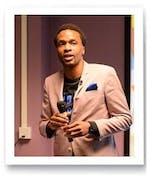 From living the 'street life' to becoming an award-winning entrepreneur and leader of distinction.

Onyi Anyado was born and raised in Hackney East London. Onyi grew up in a single parent family and went through the schooling system. During his time at university, Onyi dropped out in the second year and began living a life called the 'street life'. This destructive lifestyle resulted in six of his friends murdered and Onyi nearly getting shot dead as well.

Since turning his life around, Onyi founded two businesses, self published two books and now goes to schools and educational institutions across the UK motivating and inspiring students how to excel and stand out.

Onyi covers topics which include employability skills, confidence building, knife crime and other PHSE topics. Onyi believes every young person should maximise their time in school, have an entrepreneurial mindset at an early age and also become leaders in their chosen field.

Through Onyi's talks, students are shown how to create personal skills for their time in school and future career, the importance of personal branding and how to build and maintain confidence. Onyi recently launched a programme for schools across the UK titled How to become a student of distinction™.

"He was very engaging with the students and they responded really well to him. We would certainly consider using Onyi again."

"I just wanted to let you know that the girls loved Onyi’s talk!"

"Yesterday went very well. Onyi pitched it at just the right age groups for both talks. He inspired and motivated the children in both groups and was very engaging! A great start to our Aspiration Week!"

"Onyi is an engaging and inspirational speaker who naturally commands the attention of his audience. Our students hold him in high esteem because as a natural role model, he is able to reach young people and challenge them to be the best they can be; academically, morally, personally and socially. Onyi has delivered a number of assemblies and always makes a notable impression on students and staff alike. We have also used Onyi in a workshop capacity to work with our most challenging students so as to ensure they complete their studies at Leytonstone School. Without any reservations, I recommend Onyi's services as a speaker to motivate and teach our students to excel."

"We would like to thank Onyi for being a guest speaker at our Presentation Evening. Onyi captivated our students with his story of how he overcame adversity in his early life to achieve excellence. His career path is an inspiration to many. The positive feedback we received from our students showed that Onyi truly stuck a chord with our young adults"

"From the moment Onyi started speaking, it was clear that he had a message to be shared and he knew how to share it. Every single person at our event, parents and teachers included, not just our pupils, were inspired by his words and left thinking about how they could improve as people. Onyi’s speech was a perfect balance between recognising achievements and spurring our pupils on to the next stage of their lives and would be fitting for any school looking to emphasize this at an awards evening. Equally, he has given us much thought about bringing him back to speak to current students about maximising their time and becoming students of distinction!"