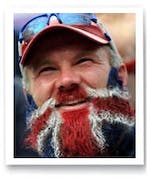 Ollie has captained his country on the rugby world stage, was the best player in the world in 2009 and has sailed around the globe: all in all a pretty impressive summary.

Ollie Phillips is one of the most loved and highly respected characters in British sport. Recognised by World Rugby as the best player to grace a sevens field in 2009, Ollie has achieved more than most in his glittering career to date.

From his origins on the boggy back fields of Hove Park, to captaining his country on the hallowed turf of Twickenham Stadium, Ollie’s adventure through the world of rugby has left no one in any doubt of his commitment to his sport, his dedication to his team and his remarkable capacity for living life to its fullest.

Ollie’s achievements are many and varied, but his proudest moments have come when wearing an England jersey. With an international career that has spanned over 10 years, 20 World Series appearances and 46 tries, Ollie has been a cornerstone in England Sevens' rise to success.

In 2008 Ollie was honoured and privileged to be named captain of his country; leading the team throughout the World Sevens Series and subsequently the Sevens World Cup in Dubai that same year. To date, Ollie’s tenure as captain is the most successful to be enjoyed by any England Sevens captain, resulting in 3 World Sevens Series victories and 6 World Sevens Series finals.

Away from the international arena Ollie’s career has so far seen him play with 4 different clubs, namely Harlequins, Newcastle Falcons, Stade Francais and most recently Gloucester. Ollie has enjoyed success with all, participating in 3 Heineken Cups, 1 European Cup Final and being voted Best Overseas Player in 2011. In addition, he also learnt French to aid his career and is now a fluent speaker of the language.

However, it is not just on the rugby field where Ollie has excelled. His recent circumnavigation of the world, through his participation in the Clipper Round the World Yacht Race on board the Great Britain boat, illustrates his sense of adventure and drive for success. Finishing second in the race and securing the position of Second in Command, despite having never sailed before, is testament to the type of character that Ollie is.

His determination and desire to champion his sport wherever possible has earned him recognition throughout the international rugby community as a positive force for the game and a strong advocate of the benefits of being part of a team. Awarded the Independent National Community Award in 2009, Ollie’s efforts were recognised on a national scale. His dedication to involve, integrate and introduce people from all walks of life to his sport is, Ollie would argue, his greatest achievement. His commitment to this integration has seen him deliver community outreach programmes on every continent across the World and his appetite to help people understand a love of the game continues unbounded.

Ollie is a credit to himself, with an incredible ability to lead, motivate and encourage those around him. His unrelenting dedication, hard work and endevour have seen him conquer some of sport’s most impressive challenges. Loved by all who meet him, Ollie is a true gentleman and as honest as they come.

"Ollie’s presentation was very good; the kids enjoyed it and were very inspired by him. Thank you for the recommendation!"

"I approached Ollie to invite him to present at a Richmond Rugby ‘professional services’ business supper. Of course, I knew about Ollie’s phenomenal achievements in sport and the amazing work Ollie does for charity. But, until Ollie presented, I had no idea about his story. Nor, did I know about how so many interesting, exciting and unique opportunities came about for Ollie. It is easy to talk about someone being inspiring, which is subjective. What may inspire one person, will not inspire another. However, Ollie had the audience, made up of 70 corporate decision makers, genuinely engaged for over 30 minutes. Ollie is perfectly charming, unassuming, personable and charismatic. But, most of all, Ollie is highly professional. Whilst successfully injecting appropriate humour into his talk, Ollie’s story is also incredibility serious and worthy of our attention and respect. I deal with many ex-sports professionals. Most of them are living in the past, attempting to earn a living from what they once were. Not Ollie, who is very much a forward-thinking and innovative business professional with razor sharp entrepreneurial flair. Above all, I was inspired by the selfless and incredible work Ollie does for charity. Ollie, over the years, has risked his life taking part in excursions, adventures and challenges to help others less fortunate than himself. From sailing around the world, to playing rugby on the North Pole, Ollie has dedicated a huge amount of time to raising millions for those in need. It was a privilege to have Ollie speaking at one of my events and I cannot recommend him enough."

"Ollie presented at our annual global lawyers conference this year on the topic of teamwork resilience. His approach was extremely engaging and delivered with a great degree of humility which meant both those who enjoyed sport and those who did not got a lot of the session - this is unlike other sports based speakers I have experienced in the past. His down to earth analysis of how he has dealt with adversity and bounced back was very compelling and really resonated with the delegates."