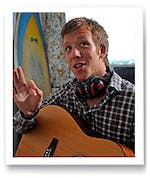 Learn about Nathan's lyrical education: how he went from overcoming undiagnosed dyslexia to becoming a multi-award-winning entrepreneur, via lunch with Princes Charles and pitching to Prime Ministers.

Nathan is a successful multi award-winning young entrepreneur who has been publicly endorsed by the Prime Minister, appointed Young Ambassador of the Year for the Prince's Trust, been an entrepreneurship role model for the Welsh Government, and represented the UK as a business delegate.

Having overcome the barriers of being an undiagnosed dyslexic at school, Nathan set up a successful music and events business and became a DJ at the age of 18 while at university. Nathan went on to organise over 1000 events and to DJ at major music festivals all whilst completing a degree in Applied Economics.

Nathan founded award winning Rewise Learning Ltd in 2008. Nathan struggled to revise for his GCSEs, and was told he'd only ever achieve C grades; that's when he realised he could remember song lyrics, but not his revision notes - and he set about turning his weakness into a business.

To date Rewise has created four educational resources and training brands and engaged over 35,000 people with its award winning learning resources and courses.

Nathan has won multiple accolades for his work to date, such as being named as one of Wales' Rising Stars of business, being named as one the top Under 30 entrepreneurs by the Trinity Media Group, being named Digital Education Entrepreneur of the year, and in 2014/15 having the honour of chairing Virgin Media Digital Youth Council and giving a Ted Talk on the subject of “progress”.

Nathan is also proud to be a founding director of Surfablility UK CIC, a surf school for young people with disabilities.

"Thank you for you wonderfully inspirational talk. You had all the children (aged from 10-13) gripped by your story and progress through life. I would recommend you as a speaker for all age groups."

“Nathan made me realise anything was possible and that I can achieve my aims in life if I work hard.”

“Nathan’s talk gave me the confidence to believe in my-self, I am dyslexic and it was good to hear about someone with a similar experience. The talk helped a lot thanks.”

“Nathan’s talk was inspiring and amazing! It opened my mind to the idea of starting a business and showed me I can get what I want from life!”

“Nathan’s talk was a true inspiration, it was a very positive and the class loved every minute.”

"I have known Nathan since I joined the Prince's Trust as Director for Wales 2 years ago. He is one of the most enthusiastic and driven young men I have ever come across. He has the motivation, commitment and ambition to achieve his goals. He sets his sights high and he is not a quitter. This is man worth backing!"

"Nathan is one of The Trust’s former young people and was supported by the Trust’s programmes several years ago. He continues to support and promote The work of The Trust and is an ambassador for our organisation. Keen to demonstrate his support for The Trust, he now runs Prince’s Trust programmes on behalf of The Trust in England and Wales."