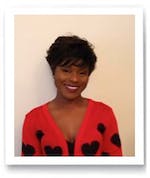 Dynamic entrepreneur succeeding despite the odds

Milly J Shoes hand creates multi award winning, hand created, bespoke special occasion shoes and shoe clips in her shop in the heart of Norwich. She has been applauded by the EDP Newspaper, The Museums of Norwich, BBC Radio Norfolk and BBC Look East as bringing handmade footwear back to the city that was once vibrant within this area.


Milly J was abandoned on a bus as a baby and taken to an orphanage in Jamaica, adopted by British parents and predominantly brought up in Bangladesh. Her gifted, artist brother took his life and this is what inspired her to start Milly J Shoes.


In early 2019, she launched her upcycling campaign to encourage the public to bring in their old shoes to have revitalised or turned into a new design. Promoting sustainability, this initiative helps reduce landfill which footwear is particularly bad for. This was covered by regional papers, Heart FM and BBC Look East News.

Milly J has teamed up with England’s oldest hotel, The Maids Head Norwich to launch shoe clip making workshops. These workshops have also been incorporated by English + and the Bridewell Museum for refugee women. Milly is humbled to be invited to create an exclusive shoe for the museum’s shoe section of Norwich footwear.

Milly is passionate about promoting creative thinking in the next generation and has been asked to work with Thorpe St Andrew School, (an outstanding school) to reinvigorate textiles due to their release of this on the curriculum.

She is also embarking on infusing the footwear arts into the curriculum of Norwich School, another outstanding school. She is also a mentor for North Walsham High School and in 2019 took her students to visit the East Anglian Air Ambulance, offering another work perspective.

Last year, Milly was delighted to win the overall award for Wedding Innovation at the Bride Wedding awards in conjunction with Archant. This year Milly has won a Luxury Travel Award for Wedding Specialist as The Shoe Store of the Year. She has also been recognised as one of Norwich’s Most Inspiring Women 2019, as chosen by a panel of esteemed judges and the EDP.

Milly J continues to do singing and tv work and last year was invited as a shoe expert for BBC The Apprentice’s shoe episode to help guide and inspire the contestants. She also was invited as a lead singer for The Mudeka Foundation’s autumn show, raising money for orphans in Zimbabwe.

"Milly J was great. Her speech was very well delivered and the message she shared with the audience was exactly what we was expecting."

"North Norfolk District Council is delighted to be able to host Milly J Shoes. Milly is an incredibly gifted Norfolk craftswoman and entrepreneur and we hope others will be inspired by her creations and story"

"Thank you so very much for last night; your talk and beautiful song at the end were both exceptional! The feedback has been inspirational, with everyone really enjoying it. I am eternally grateful to you for giving up your time to be involved. The girls have really enjoyed dressing up as women who have inspired them today. We are hoping to have raised enough money to sponsor two sisters from the Women for Women International programme, which will be absolutely fantastic".

"Your shoes are truly amazing and your story so uplifting. We were so happy to have you exhibit and give an account of your life on this very special occasion. I look forward to having you back next year".

"Emily worked collaboratively with the school's therapy team to develop students' emotional literacy and supported student's to build positive self-image. Emily was reliable, creative and trustworthy and enjoyed working with the students. Emily also worked well with the staff team".