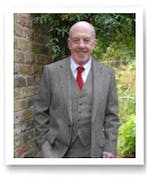 Born into wartime Docklands, Mike's life has seen post-war austerity, the creation of the welfare state, the Cold War, the cultural explosion of the 1960's, the greed of the 1980's,the near collapse of our financial system, more austerity and the recognition that climate changes threaten our way of life on this tiny planet.Yet he remains an optimist.

With the death of his mother when he was 5, Mike was fostered before being signed into the army at 15 for 12 years. Married with a family, he left to persue a career in architecture until, divorced and with his children, he moved to a terraced house in Yorkshire to become a fulltime student. Supplementing his grant with a number of odd jobs, he became a community activist.

Leaving college, Mike got involved in the city farm movement and was instrumental in creating its National Federation and, after a spell of unemployment, became Director of the farm in Leeds. This had no buildings or services and was threatened with immediate closure but was rescued to become one of the best of its kind in the country. Moving to another charity as a Director, he helped homeless people to build their own sustainable homes. This charity, too, was in danger of closure and he helped make it successful. In recognition of his work, Mike was shortlisted for the 'Jamieson Award' for an outstanding contribution to the volunteer sector and highly commended in The Guardian 'Jerwood Award' for excellence on the charity field. He has lectured in Belguim, Bulgaria and Russia and 15 years ago, set up his own consultancy.

He has renovated 5 properties, run the marathon twice (still happily running) and goes to the gym each day. Now at an age when his peers have opted for cardigan and slippers, he has embarked on a sixth career as an author and speaker. In addition to his first two books, "The Real Big Society" and "The Other Side of the Doors", he is partway through two others and has been recommended for an MA in Creative Writing at the same university as his youngest daughter; proving that it is never too late to realise untapped talent.

"Mike has the gift of managing to weave personal anecdotes about the experiences he has had, personally and professionally, into a meaningful and heartfelt message which will resonate with his audience."

"Mike is one of the most engaging speakers I have ever had the privilege of hearing. Impassioned, witty and wise, he is always able to make his subject interesting and relevant to his listener, whether they be young or old, jaded or enthusiastic. Mike has the gift of making people think,and getting them to follow up that thinking. He does this subtly sometimes, and overtly at others, but his reasoning is surefooted and his manner is appealing. He has the ability to convince without bullying, to persuade without propaganda - in other words he is measured yet entertaining. I would heartily recommend Mike as a public speaker in any forum, but especially schools where young people will, I believe, respond readily to his ideas and format."