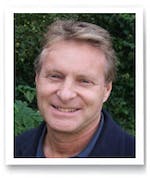 Inspirational, Emmy Award-winning director who has taken 12-15 year olds to some of the most extreme and spectacular locations on Earth with Bear Grylls

Marshall grew up in Leeds and, after reading Maths at Oxford University, he taught in a large Comprehensive school. He began his broadcasting career in BBC Radio as a recording engineer, soon becoming a radio producer, presenter, and Radio 4 announcer.

He moved to BBC TV in 1989 to join Newsround, where he was series producer and director of around fifty Newsround Extra documentaries, many made in extreme and dangerous conditions. He filmed the rescue of child carpet slaves in India, raids to free dancing bears in Greece, and the lives of children caught up in the war in Bosnia. His film ‘War Child’ won an International Emmy.

After a spell producing science programmes including ‘Tomorrow’s World’ and the ‘1999 Total Eclipse’, he created the ‘Serious..’ adventure series for CBBC, filming young people literally going to extremes to help the planet. In a series of world firsts, teams of 12-15 year old children have travelled across the frozen Arctic on husky sleds in temperatures as low as minus forty, climbed to twenty thousand feet in the Andes, rounded the notorious Cape Horn, walked fifty miles across the Namib Desert to the Skeleton Coast, lived rough in remote jungle to help endangered species such as orang utans, and been first to abseil off Kaieteur Falls in Guyana, the world’s most powerful single-drop waterfall. Marshall was with them every step of the way, and the series is now breaking records of its own, winning an unprecedented four BAFTAs and three Royal Television Society awards, plus a host of international honours. It is seen in around 150 countries.

Marshall was founder and senior tutor of the ‘Media Master’ media training company, and is also an established factual author. Among his titles are ‘Extreme Survival: an Adventurer’s Guide to the World’s Most Dangerous Places’ and ‘The Newsround Book of Space’. He has worked with some of the biggest names in broadcasting, from Michael Buerk to Fearne Cotton and Steve Backshall. Adventurer Bruce Parry led his first two Serious expeditions.

Recently, Marshall developed and produced the new adventure series Bear Grylls Survival School for CITV, in which 12-15 year olds learned to survive off the land in Snowdonia. It was definitely an experience of a lifetime - being taught by Bear Grylls, that meant everything from live crickets to raw earthworms!


Marshall has always loved passing on his experience and inspiring young people, opening their eyes to the amazing world beyond their doorstep. His talks leave them buzzing.


Marshall is also a former maths teacher and maths producer in BBC education, where he wrote and presented the interactive guide 'Help Yourself to GCSE maths.' With a mix of anecdotes and maths magic tricks, he inspires young people to realise that far from being one of the many who think they are useless at maths, they are almost certainly mathematicians at heart.

"These incredible projects are the best form of reality TV, encouraging the nobility of their participants rather than, big Brother style, finding ways to bring out their weaknesses’"

"The series has been incredible. I don't know how you begin to think about doing this, let alone achieve it. This show single-handedly kiboshes any notion of dumbing-down, or long-lost golden ages of kids TV!’"

"I didn’t personally see Marshalls talk but the feedback I have had was that it was very good."