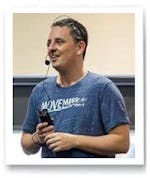 Mark Williams is a Campaigner, Author and Trainer with lived experience of Depression and Anxiety after suffering for years in silence. He was diagnosed with ADHD at the age of 40 after a breakdown in 2011 while under community mental health services. Mark also talks about his low esteem, using negative coping skills and how he has turned his life around.

Mark shares his story about his struggles and leaving school at 15 to changing a negative time in his life to being known as one of leading figures in his field. He is a hyperactive, passionate speaker and engages young people and adults to seek help today and explains that we ALL have Mental Health "Good or Bad" using the right terminology to his audience. He also speaks to parents about what mental health is.

He was awarded Inspirational Father of the year and Local Hero at the Pride of Britain awards in 2012. He wrote his first book in he same year and is often seen on Television and Radio stations around the world. He has been involved in many publications and short films about how early prevention and not suffering in silence of any mental illness must be addressed as early as possible with schools the ideal place to start.

After being told he would never get a job at 15 has helped to train future health in various universities, and has recently been working with parliament to get fathers better access to treatment during the perinatal period. He works in partnership with Dr Jane Hanley who also works with Parents suffering from Perinatal Mental Health and founded Fathers Reaching Out.

After both himself and his wife suffered with Mental illness are now voluntary youth workers in the town of community of Bridgend where sadly so many young people took they're lives and was involved in world media. Mark shares a simple message to pupils that he wished he knew about before his breakdown in 2011 "The quicker the help, the quicker the recovery"

"I met Mark through a journey that he started about getting to know more about ADHD. From meeting Mark the tables have turned somewhat and Mark has become an amazing friend who inspires me. He has shared his story with me and is now showing me the very best way to get the most out of what I want, Thank you Mark, a very pure man with a heart for the best things in life."

"I just wanted to say a HUGE thank you for such a fascinating talk today. Thank you also for staying behind to talk to some of the learners. Feedback has been very positive and if we managed to raise awareness of mental health issues and help just one person then it was all worth it."

"Working closely with Mark Williams and involving him with children development programmes has proved to be a complete asset to our work. His enthusiasm and diligence, attention to detail is second to none. He inspires and motivates children with talks about mental and physical wellbeing. I have worked with him on numerous occasions and always inspired by his work."

"Mark Williams is a community champion who is dedicated and committed to supporting the most vulnerable members of our society. He selflessly works to help those in need and we must commend his bravery in coming forward and sharing his story so others can benefit."