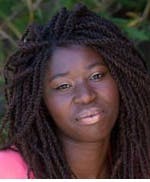 How losing over 50,000 chess games has prepared Lateefah for success.

Lateefah Messam-Sparks is 25. She has been involved in the chess world for over 15 years. She has played chess across the globe from London to Thailand and met people from every continent. Chess has been a massive part of her life from playing in the England Junior Team to now working as a chess coach in schools and acting as an advocate for junior chess across the United Kingdom.

Lateefah comes from humble beginnings but has always been driven. Her speech covers the importance of failing, losing and stepping out of your comfort zone to pursue your dreams - no matter how unusual they are. Using chess as a metaphor for life she analyses the best ways to analyse, strategise and execute your goals. Chess, she argues, is a wonderful vehicle to assist young people to live their passions and achieve their goals successfully. Beyond that feeling comfortable not always winning, learning to lose with grace brushing yourself off and starting again.

During her life she has held diverse interests, such as sports (swimming, gymnastics, and cross-country running for the county), music, and drama, but finally she settled on chess, which she has played competitively first at the local and regional level and then latterly in the England Junior squad with games throughout the UK and internationally over two continents (including Ireland, France, Gibraltar, Georgia, Greece and Thailand).

For two years Lateefah attended one of Britain’s leading Public Schools, Wellington College, as a Chess Scholar and has for many years enjoyed prominent coverage from her home town media, as well as national coverage in magazines and websites. She has had the good fortune to have been coached by some of Britain's Grandmasters and is well respected by UK Chess’ movers and shakers.

While studying at Newcastle University she organised the first chess boxing tournament outside of London; other interests include travel and volunteer work with children and the homeless. Lateefah currently works as a consultant and chess coach in a London school and has worked with children aged 4-18.

Lateefah has had lots of diverse interests over the years. She has now taken upon a new challenge. Lateefah has started a masters in creative writing and is currently writing her first Young Adult Novel.

This talk is both fun and interactive, and hopefully, you will be left wanting to follow your dream, work hard and stove for success no matter what it may be.