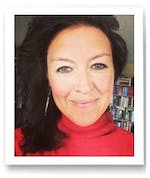 Kari Herbert is an author, publisher and speaker. She first started travelling at the age of ten months when her father, pioneering explorer Sir Wally Herbert, took his family to live with a tribe of Polar Inuit for over two years on a remote island off the coast of Northwest Greenland. Kari has continued to travel extensively ever since and has become a successful author, travel photojournalist and popular speaker.

Kari’s first book – The Explorer’s Daughter – published by Penguin, was aired as ‘Book of the Week’ for BBC Radio 4. An extract of the book is also currently on the EdExcel English IGCSE curriculum. The book tells of her return to the place of her early childhood and her quest to understand her connection to both the polar wilderness and its unique people. Her other books include 'Heart of the Hero', which drew attention to the remarkable achievements of the wives of celebrated explorers, and 'In Search of the South Pole and Explorer’s Sketchbooks', which has been translated into multiple languages.

As a travel photojournalist, her work has been published in magazines and newspapers all over the world, including The Sunday Times, The Independent, The Guardian and Geographical and Traveller magazines among many others. She has twice been a judge for The Guardian’s Travel Writing Competition.

Kari is an inspiring and energetic public speaker, who takes her audience on highly-visual thrilling journeys from the Arctic to the deserts of Oman. Her presentations are engaging, deeply personal, frank and inspiring. She frequently lectures at literary festivals and events and has spoken at venues such as the Royal Geographical Society, the British Library and the Explorers Club in New York, as well as at many schools and universities. Her most challenging talk, however, was given on board an expedition ship crossing the thirty-foot waves of the Drake Passage en-route to the Antarctic, with tables, chairs and her audience sliding back and forth across the room! She lives on a clifftop overlooking the Atlantic with her husband, historian and polar guide Dr Huw Lewis-Jones, and their daughter Nell.

"On Thursday our pupils were treated to an exceptional lecture given by the charismatic travel writer, Kari Herbert. The basis of this presentation was her passage from her biographical ‘The Explorer’s Daughter’ which appears on the English syllabus. However, her talk was far more than an insight into an examination piece. From her remarkable upbringing immersed in Inuit culture as a toddler through to her treks through deserts of all descriptions, Kari has led a thrilling and wonderful life and should be an inspiration to many about what it is possible to endure, love and write about. Of particular interest were her thoughts on the relationship between mankind and nature, clearly influenced by her early life. The challenge for us all is to seek out experiences and reflect upon them with intensity and openness. It does not matter if they are everyday or exceptional."

"What a superb presentation, thank you. You had our students enthralled. We will not forget your talk at St John’s for some time!"

"Just to say a really big thank you for today. The children were really fascinated by your stories and buzzing after your talk. Thank you for being willing to give up your time to share your experiences with us."