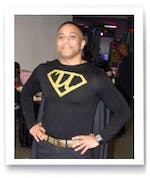 Julian Hall is an entrepreneur and speaker determined to make a difference. The best-selling author of 3 books and serial entrepreneur started his first business in his late teens, when he secured a deal to supply outfits to one of the hottest urban stars of the time. Julian was part of a collective of designers and music artists, and the experience taught him what he wanted from business, and what he didn’t want. The collective disbanded soon after, but Julian pursued his entrepreneurial exploits, and worked his way up.

Julian started another business, but became disenchanted by the lack of support and guidance around him, so he ventured into the world of work. A career in IT followed, and he worked with a number of high profile companies such as GE Capital, Schroders and Morgan Stanley before he decided to step back into the business foray with a number of small businesses that he had developed, including one of the first creative agencies in Hoxton.

Entrepreneurship is in Julian’s genes, and he has always come back to it. Having learned in the field, Julian has experienced the highs and lows of business, which has enabled him to mentor thousands of other businesses. His direct, tell it as it is approach, motivates in one-to-one scenarios and captivates people when he is on stage teaching in front of thousands. His success has enabled him to work with brands such as Virgin Media, the NHS, Transport for London and the World Bank.

After speaking to many young entrepreneurs, Julian realised that the one thing that they felt was missing was education on entrepreneurship from a young age. It is for this reason that Julian created Ultra Education – a company committed to teaching entrepreneurship to kids. The programme, developed with teachers and entrepreneurs, runs over 5 terms alongside the school term and is the perfect complement to the national curriculum. The programmes are interactive, upbeat and they nurture life skills such as confidence and literacy. The programme has been well received and to date, 76 children have started their own businesses.

Very few entrepreneurs have the tried and tested experience to back up what they say. Julian Hall has the whole package, from tangible business experience, to teaching and mentoring. With Ultra Education continuing to do well, as well as his other businesses, and people coming to him for expert advice and guidance, Julian Hall is a name that will not be forgotten.

"Virgin Media Pioneers has been lucky enough to have Julian on board as one of our experts. Taking a vital role in passing on his knowledge as an experienced entrepreneur, Julian has produced a number of excellent video blogs on a variety of topics that have been well received among our start-up community. The combination of Julian’s personable nature and business expertise are truly an asset to the Virgin Media Pioneers programme.”

“Julian was contracted to provide a week of training on Entrepreneurship and Innovation for the ICT4EDC Project. Julian delivered the training in a very enlightening and engaging manner. The content was useful, current and easily understood. The participants learnt a lot and were quite grateful for his input.”