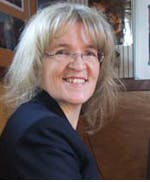 Her motto for all audiences: 'look up, live it and love it'!

Jane has been a guest on ITV’s ‘This Morning’ show, BBC Two ‘Stargazing Live’, BBC Radio Four ‘Midweek’, BBC national and regional radio and TalkRADIO and TalkTELEVISION. She is currently resident astronomer for BBC Sussex and Surrey Radio and Uckfield 105FM.

Most recently she successfully presented for Sir Richard Branson and his Virgin Galactic Team at the Royal Observatory, Greenwich and has co-presented the theatre show TOUR OF THE UNIVERSE - a pioneering UK national tour. Guests included the presenters of BBC television’s ‘Sky at Night’ programme and other high-profile science communicators and was described by Professor Chris Lintott as 'a first and a triumph'.

Having co-presented with the late Sir Patrick Moore CBE FRS, and other celebrities and media professionals, Jane was invited to be the Inaugural Speaker for the Sir Patrick Moore Memorial Lecture at Holmewood House School, the school where Sir Patrick himself taught. She can be seen presenting at national astronomy and literary festivals as well as many other venues/events throughout the UK.

She has been featured in, and writes for, various astronomy publications, including the UK's BBC Sky at Night and the US Sky & Telescope.

With international award winning business skills, Jane was initially head hunted for a career in the Foreign & Commonwealth Office but instead went to sea. As a senior officer she studied for a Degree in Astronomy and Planetary Sciences and started presenting all over the world, her highlight scripting a live television/theatre interview with the second man on the moon, US astronaut Edwin ‘Buzz’ Aldrin.

Her successful book, the Haynes Astronomy Manual, is still an international bestseller and has been translated into several languages.

An elected Fellow of the Royal Astronomical Society (FRAS), Jane presents for select clients in corporate team-building events to theatre-sized presentations before capacity audiences of all ages.Her motto is ‘Look up, Live it, Love it!’She is grounded by day in her role as a British Horseracing Judge but communicating her passion for planet Earth and the science of astronomy is when she comes into her own. Her enthusiasm is infectious. She adores her subject and knows that you will too.

"Jane was excellent on Friday, she arrived with plenty of time to set up and delivered in exactly the time asked. I think the queue of 20 odd children who wanted to ask questions at the end showed what an impact her talk had. Her enthusiasm really came through. Thank you very much."

"Really good thanks, was a great talk and had many students told me they were inspired and fascinated already. Logistically Jane arrived very early and communicated before and after perfectly."

"Jane came to us highly recommended through word of mouth and I must say she did not disappoint! The lecture was both inspiring and humbling as she showed pupils the magnitude and majesty of the universe as we understand it, whilst explaining the truly mind-boggling scale of the universe and how insignificant our place in it is, but how inquisitive and innovative we are as a species to look at and travel through the heavens in order to seek answers to our questions. The feedback from pupils, teachers and parents who attended the lecture was resoundingly positive and reverberated into science lessons and households for some time to come. Indeed, many parents came to see me and told me what they had learned from their children over the meal table that night! Her easy style of delivery and outstanding PowerPoint presentation really brought the subject to life and everyone left the talk with a new appreciation and respect for the size of the universe and our place in it..."

“The children have truly gained so much from having Jane with us. The impact she has made on their motivation, knowledge and understanding of astronomy is remarkable. The children always have plenty of intelligent questions to ask and enjoy ‘showing off’ their ever-increasing enquiring minds and what they've learnt from her previously.”

"We had the pleasure of hosting our inaugural Christmas Lecture in December 2015 which was delivered by Jane. It was a fantastic family friendly talk that generated quite a buzz from our visitors, especially the children who were captivated by Jane’s presentation. The content of the talk was pitched perfectly for the family audience and guided our visitors on a unique illustrated voyage."

"Jane’s talk was really good and interesting. She had a really nice manner and was clearly incredibly passionate about her field."