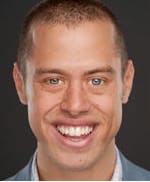 James is a regular speaker at enterprise events, universities and schools on topics including networking, marketing, entrepreneurship, establishing a brand, leadership and opportunity. James builds on many of his personal experiences - the challenges and successes of setting up a business as a university graduate and the innovation and skills required to grow and develop. He is passionate about helping young people and encouraging the next generation of entrepreneurs. Through sharing his story James aims to show others that setting up on your own is a viable career choice, something that many young people are not aware of or lack the courage to take their opportunity.

Background: The Beans Group is a media company that empowers young people to thrive. It was named Digital Business of the Year 2013 at the National Business Awards. It runs youth media brand Student Beans and youth insights consultancy Voxburner. It’s origins started with Student Beans a website for university students offering discounts, money saving advice and entertainment. James became one of the youngest entrepreneurs in the UK when he co-founded Student Beans at the age of 22 alongside his brother Michael, following a brainwave he had whilst studying Business Commerce at The University of Birmingham.

Growing up in the age of the Internet, James recognised that when students arrived in a new city with the pressure of living on a limited budget, they would turn to the web for help. Since its launch in 2005, Student Beans has signed up over 1.5m registered users and this is increasing by 1000 - 2000 new users daily. James has seen the company grow to over 40 employees and establish itself as a recognisable brand at universities across the UK.

In 2013, James graduated as a Marketing Academy scholar. In October 2013 James was one of 30 selected out of 1300 to address The One Young World conference represented by over 190 countries, addressing the issue of youth unemployment and taking action.

James’ drive and passion have led to him winning a number of awards, including Social Media Entrepreneur of the Year at the Great British Entrepreneur Awards 2013, Young Entrepreneur at the ITC Awards 2013 and he was also named one of Ten Outstanding Young People at the JCI Awards and one of Future 50 2013.

In 2014 James launched a new initiative, FriendlyFriday, a movement to help foster connections, and a Social Enterprise designed to help and make a difference to the lives of young people. The profits made are invested back into supporting young people providing grant funding for related causes or investing in Start-ups all designed to help young people reach their potential. See friendlyfriday.org for more info.

"Just to say we had James Eder in this afternoon who was excellent, gave a really interesting talk on entrepreneurship to our year 12s."

"James Eder exemplifies all the qualities one looks for in an entrepreneur. He applied his energy, strong self belief and considerable marketing skills to an idea, turned it into a business and made it work. What makes James stand out from the crowd is his refusal to become complacent, he innovates continuously and because of this, his business has grown at an impressive rate. Success is not only due to his business acumen; James has also brought a strong sense of corporate responsibility to his business model. His employees receive training which both strengthens their career prospects and teaches them about business start-ups. James is a great ambassador for young entrepreneurs; he has talked at The University of Birmingham on several occasions and really delivers the goods. Suited to school and university students alike, James’s sharp, insightful talks about his experiences setting up studentbeans.com provide an uplifting atmosphere and leaves students full of jelly beans and searching for a business idea of their own!"

"Full of energy and inspiring anecdotes, James gave a superb talk at a recent 'g2i' investment day workshop. As a bootstrapped entrepreneur James was able to give words of encouragement and wisdom to the early stage entrepreneurs about how everything is negotiable and that they should always be creative about every deal they make. James is a genuine guy and a great speaker who is very encouraging and inspirational to other entrepreneurs – an absolute star!"