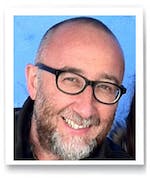 Writing funny with an ex-teacher turned comedy scriptwriter who now does that sort of thing for the telly.

Over the last twenty years ex-teacher Ivor has been writing extensively for television on such shows as The BAFTAs, The X Factor, Mock The Week, Dancing On Ice, The National Television Awards, Off Their Rockers and Bruce Forsyth’s Hall of Fame. He has written for the likes of Stephen Fry, Graham Norton, Claudia Winkleman, Ant and Dec, Dermot O’Leary, Joan Rivers, Miranda Hart and many others.

Using scripts and running orders from a variety of these shows Ivor provides a unique insight in to how these sort of television programmes work when it comes to the writing side of things. He will also talk about the process of writing with particular reference to humour and gag writing. Finally, there will be a practical opportunity for the students to do some writing themselves and, for those that feel like it, take on the role of television host and read out their scripts.

Ivor believes that this is a fun and effective way to get children and students writing. It encourages them to think creatively, whilst also getting them to use all the basic writing skills such as grammar and spelling. His only worry is that one of the students will be too good at it and he’ll end up out of a job.

“Following a short introductory presentation Ivor’s workshop became dynamic and all about participation - giving the children an opportunity to voice their ideas and, with Ivor’s help, develop some of their writing techniques and skills. Ivor was able to keep the children interested and on task while ensuring they were being stretched in terms of their experience and abilities. Ivor’s background in teaching was indeed useful in terms of planning and delivering the workshop and his ability to manage a classroom. However, what the children really took away with them was his creativity, unique sense of humour and joy in his craft. Crucially for our children he was able to do this at this same time as demonstrating the professionalism, hard work and rigour necessary for success in his field. The children and staff involved in the workshop have asked Ivor to return to school at the next opportunity he has. I couldn’t recommend Ivor more highly for similar workshops or events in the future.”