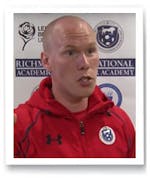 Gerard Jones started his first business aged 19 in early 2009, which he later grew into becoming recognised among the Top 100 Best Business Start-ups in the U.K. in 2010 by startups.co.uk 100 Awards. Gerard later became a Director of Coaching at Arsenal Soccer Schools, one of the largest soccer school programs in the world at the age of 21, winning a series of awards including the Future 100 Young Entrepreneur of the Year Award in 2010, as well as being listed in the Guardian Newspaper's Top 7 Young Entrepreneurs List in 2011.

With a passion for education as well as working in elite football, Gerard established a Coach Education & Training company alongside studying for a Master's degree in Performance Coaching. He has worked as an Academy Coach and Head of Coaching in the professional game, as well as being a Director of Coaching in the U.S.A., and an Elite Coach Educator in Morocco at national level, combining studying with running a successful business.

Gérard is currently studying a PhD in Skill Acquisition/Transitional Learning and runs several coaching companies around the world which have generated over $5m in revenues.

He is an outstanding role model for young people, and has been a guest speaker at conferences, including running seminars and workshops throughout the U.K., Norway, U.S.A and Belgium. He focuses on entrepreneurialism, talent management, developing a start-up and how to set targets to achieve your vision. He also offers support to students on how to prepare for exams as well as revision techniques he's developed over the years, maximising memory and recall in order to apply knowledge successfully under pressure.

Gerard is also a Qualified Teacher and Published Author, having written several research articles on coaching and communication which includes his own book titled "Let's Talk Soccer", as well as contributing to other entrepreneur and coaching books.

Future 100 Young Entrepreneur of the Year 2010 - Striding Out, sponsored by Natwest

"Gérard posses's high acumen and delivery in practical sessions as well as classroom based lectures. Gérard is clearly highly thought of from his piers and has a strong ability to keep people engaged"

"Gérard has been involved with Petroc through the European project ENTEUR (Enterprising Europe). Gérard is a brilliant motivational speaker, whose enthusiasm captivates and enthuses an audience and we hope that he will come back in the future to work with the staff as well as the students"

"I have known Gérard for several years and have always been impressed with his enthusiasm for developing young adults. His boundless energy in wanting others to succeed is a credit to his own positive outlook and his desire to enable others to overcome challenges"