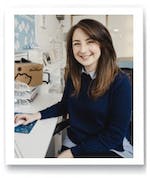 Faye is the Founder of bearhugsgifts.com, a Young Ambassador for the Prince's Trust, a qualified Speech and Language Therapist, speaker and blogger.

Faye's talks for secondary and college aged students centre around how she came to start her social enterprise after falling very ill in her early twenties. Inspired by a package she received through the post from a friend, Faye launched BearHugs which sells a range of 'hug in a box' gift hampers that can be ordered online, personalised and sent directly to the doorstep of a loved one.

When unable to leave the house or, on some days, move from her bed, Faye used social media to build an online business and create a dream job for herself. What at one point felt like the end, was actually the beginning of something amazing.

Faye's business BearHugs is rooted in strongly-held values and she has worked hard to build a brand that she is proud of. BearHugs not only now provides Faye with a living but also offers part-time flexible working opportunities to others living with chronic fluctuating illnesses. Faye has also formed a philanthropic partnership with the charity, Post Pals.

Faye talks about how she went from being a high-achieving student and medical professional to bed-bound before becoming an award-winning entrepreneur. She also talks about creating opportunity in adversity, the value of following your passion and how compassion both to yourself and others can be powerful.


She touches on how falling ill made her re-evaluate and drew attention to the fact that despite feeling overwhelming self doubt as a teen and young adult, she had also been quite entitled. Through ill health, she was forced to be grateful for the little things in life and learned that certain things mean all the more when they have taken time and been earned through hard work, perseverance and determination.

“Faye was an absolute inspiration, her story, business and the way she presented herself was relatable and made me believe I could be as successful as her.”

“Faye was fantastic and very inspirational. Her passion was infectious!!”

"I really connected with Faye, she was inspiring and real and had hit a low and rose up like a phoenix"

"We were lucky enough to have Faye develop a number of workshops on Entrepreneurial Skills as part of an Employability Conference for our Year 10 girls. Her sessions were well thought out and her use of visuals and props was excellent. Her story struck a real chord with the pupils and they were engaged and interested throughout the workshops. Her content was perfect for that age group: the students really understood Faye's journey and where she was hoping to take her business. She highlighted the skills that she had to employ when starting out, the attributes she needs now and those she hopes to develop as her business grows. We loved having Faye as part of our very high powered team of speakers for the conference. She was a valuable addition to the group and, most importantly, the girls loved her sessions. We will certainly work with her again in the future."