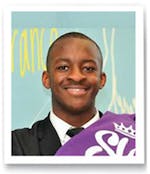 From delivering newspapers to being on the news.

Eric Bishyika is a young entrepreneur from Oldham, who at 13 years old (while he was at school) set up a clothing business (SW Clothing) using money that he saved up from a paper round. Through hard work and determination, he went on to win a number of awards for his entrepreneurship and has featured in the BBC News, Channel 4, Manchester Evening News & other articles.

Eric is now 20 and has been running his business for 6 years. He has worked with various charities helping them to raise money and is a great believer in supporting young people. Eric is also in the process of writing his own book about how he started a business at 13 years old, sharing his tips and advice with other young entrepreneurs.

In 2015 Eric launched S.E.T (Schools Enterprise Tour) which is a project that runs in schools, colleges and other educational institutions, helping to empower, motivate, and encourage young people to take ownership of their careers. It is delivered in a form of assemblies, masterclasses, workshops and one to one mentoring. The tour covers topics such as mindset, time management, power of opportunity, preparing for exams and employability skills. If you would like a speaker who is young and inspiring, who interacts well with students and delivers a strong message, then look no further. Eric has spoken to over 5,000 young people and has had great feedback everywhere he has spoken.

"Eric was the guest speaker at our annual Further Education Awards ceremony where he delivered an uplifting speech to more than 100 award winners, their friends, families and College staff. He shared his story and the positive message of working hard to become a success and it was excellent to see Eric spend time with award winners who wanted to hear more from him on the night. Much like he wished our students the best, I'd like to wish Eric all the best in his future business endeavours too."

“Year 10 students were fortunate to hear Eric’s story when he presented recently at The Radclyffe School. They were engaged by his clear journey from a young boy to the young entrepreneur he has become. One student commented to me afterwards that they one day wanted to run their own business as they had been so inspired by his speech. I think this is the biggest compliment to an external speaker that they have inspired others or that they changed the mind set of an individual.”

"Eric has delivered two assemblies at Newman College and both were highly successful. Eric shared his story, as a local student to where he is now and the students were all thoroughly engaged. I feel it has inspired our students to work harder in school and that their dreams can become a reality if they put their minds to it."

"Eric is a hugely inspiring speaker who, on several occasions, has really engaged the students at North Chadderton. His story of success is one that teaches young people valuable lessons in resilience and making the most of every opportunity presented to them. Students can relate to Eric's story and he has offered significant support in aiding our students to realise their entrepreneurial ambitions."