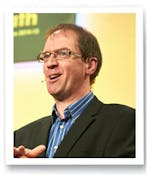 “Can you hear me at the back 'cos I can’t hear you at the front!” This and other tales from the life of a deaf musician

Paul Whittaker is an exceptionally gifted musician who has dedicated his life to bringing music to those who may not otherwise be fully able to experience and enjoy it.

Born in Huddersfield, with a hearing loss, Paul has been profoundly deaf since the age of eight. While still at school he gained piano and organ diplomas from the Royal College of Organists and from the London College of Music, yet was turned down by a dozen universities who focused on his deafness rather than his potential before being accepted to Wadham College, Oxford, followed by post-graduate performance study at the Royal Northern College of Music.

In 1988 Paul founded the charity Music and the Deaf, which he ran for 27 years, to help deaf people experience and enjoy music.

For over 20 years Paul has also had a thriving career signing theatre performances, on the West End and on national tours.He gave the first ever signed (sign language) Prom, featuring Dame Judi Dench, in 2010, and has signed for Rambert Dance Company, Opera North and The Sixteen, and at the Edinburgh International and Aldeburgh festivals.

In 2011 he joined the Feel the Music project with the Mahler Chamber Orchestra, visiting numerous cities around the world, including Lucerne and Hong Kong, along with the pianist Leif Ove Andsnes.

Awarded an OBE for Services to Music in 2007, and holding two Honorary Doctorates from the University of Huddersfield and the Open University, Paul continues to raise awareness, challenge preconceptions and break down barriers in his new freelance career as an engaging and entertaining speaker.

He is currently devising Signed Song examinations for The University of West London/London College of Music, and in increasing demand as an adjudicator for signed song at music festivals and competitions.

"I have known Paul Whittaker for nearly a year now in a professional capacity. He is an amazing and inspirational role model for all young people not just the deaf. Over the last year he has supported the school through a number of events; he engages easily with people of all ages and consistently demonstrates that deafness is not a barrier to achieving ambitions and dreams. A recent whole school assembly significantly raised awareness in our pupils of the challenges deaf people face on a daily basis. I have been particularly impressed by Paul’s enthusiasm and joie de vivre; nothing ever seems to bring him down! Paul has a wonderful sense of humour and our children and staff love him. He is truly one in a million and would be an asset to any organisation."

“As part of our Sign Language course, every year we invite Paul Whittaker to be a guest speaker to talk about his life experiences as a Deaf person. Paul is an excellent speaker and the students come back year after year to see him. Paul had a talent of giving lots of information in a fun yet informative way and students spend weeks after still talking about him and the event.”

“I first heard Paul speak at an event in 2009 and I can honestly say it was one of those moments when life changes direction, because Paul is the most inspiring speaker I’ve ever heard. He is funny, warm and engaging, and he captivated the audience from the moment he started speaking. Inevitably, his deafness makes people take notice because he is different. But within a few moments the disability was no longer the issue, it was what he said. He is one of the funniest speakers I can remember hearing, but his message about the challenges that he and other deaf people face in their daily lives was truly inspirational. It is not an exaggeration to say it was a moment I will remember for the rest of my life.

I was so impressed by Paul that I invited him to be our Guest of Honour at our Speech Day in July 2010. Paul addressed the Junior School in the afternoon and the Senior School in the evening, holding both audiences spellbound, both children and adults. He read the mood exceptionally well and was able to change the focus of his comments to suit the different age ranges. My only regret about the whole process was that I will probably never again during my headship be able to find anyone to match Paul! No one has yet come close, if I'm honest. Again, it is not an exaggeration to say that I still receive comments five years on, asking me to invite him back to Silcoates.

If you need someone truly inspirational to talk to an audience, look no further than Paul Whittaker. I have heard many people speak over the years, but I've never heard or seen anyone who made the impact that Paul did on so many people.”