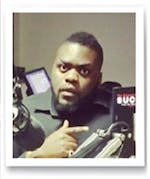 Raised in a severely deprived and notorious estate in Waltham Forest, Divine sold Class-A drugs at the age of 16. He then encountered an almost fatal shooting that sparked a transformation in his life. As a former drug dealer, Divine has witnessed the hard-core and vicious cycle of gang culture.

After leaving the streets and turning his life around, Divine wrote a book called the ‘The Elements of Real Success’ which offers alternative pathways to real life situations and challenges you to question the meaning of success. 'The Elements Of Real Success' takes you through a journey of Divine’s experience, from a normal family life to a family breakdown and an experience of financial hardship. Desperate to support his mum and to avoid the realities of poverty, he was compelled to the life of crime.

He is now on a mission to help other youngsters escape the traps of hopelessness and low expectations that trapped him for so long by imparting his knowledge. Divine would like to address mistakes that may have been made by our older generation in which ultimately plays a major role in our children’s futures. He would also like the opportunity to educate and raise awareness to staff on how to spot the signs of a pupil being groomed into gangs.

Divine believes it is important to empower our younger generation on real life situations in order to give them the best head start in life. Divine strongly believes education is very important to ones future, especially Maths, English and IT.

Knife crime in the city has risen to a four-year high following a relatively steady increase since June 2014. In June 2012 there were 1,719 recorded stabbings of people aged under 25 in the capital, compared with 1,749 in August 2016. There must be more we can do regarding awareness.

Divine is currently studying Law at the University of Greenwich. He aims to make young people well informed about the choices they make, and think innovatively in attaining success.

"It is fair to say that Divine was excellent. He was engaging and on the children's level throughout. The children were interested in his prior experiences and talked in great depth about his visit the next day. Could you please pass on our thanks to him - we will most definitely be using his services again"

"Divine was brilliant, I am in the process of trying organise more events with Bristol City and will be looking to use him again for future events."

"Divine gave an emotive and inspiring presentation to our students on how he got involved in drugs and gang culture. This made a great impact on the students and they now appreciate how easy it could be to get caught up on a path to self-destruction. Divine spoke from the heart warning them of the dangers but was also positive about how to overcome the challenges they may face."

"Divine always speaks well on our show, very confident and well spoken. We have had him on our the show several times and will continue to have him on here. He is a real inspiration to our listeners and youth keep up the good work".

"What a brilliant young man. I have seen him grow from strength to strength. He is an inspiration to the youth. Every time we have events I am more than happy to have him speak as the youth take very well to him, as he takes to them. He is also an effective mentor - one that young people can relate with".

"Keep up the good work young man, you are going far. Your journey is a real testimony in it self. All the things you have been through shows these youngsters that there is light at the other end of the tunnel."

“Divine is one of those rare speakers who enthrals his audience from the moment he steps on stage. Not only does his story highlight many of the issues facing those in poverty and deprivation in the inner city today, but he also articulates his recipe for success for everyone, based on the importance of self-belief and hard work. His dynamic and passionate style of delivery gripped the sixth form audience throughout the session and the barrage of questions at the end clearly indicated how much the pupils were inspired by his words”