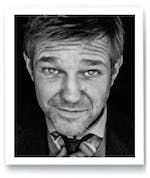 Find Your 'Voice'. Fulfil Your Potential.

Immensely engaging, authentic and high energy, David Chabeaux is a true innovator. He runs around the world as an award winning performer, composer and writer as well as an internationally acclaimed speaker and expert on creativity, innovation and performance.

As an expert in creativity, innovation and performance - his speeches, coaching and teachings continue to be a revelation in the worlds of business and education. As a former Director at the global consulting firm of the great American Leadership guru Dr Stephen R Covey – author of ‘ The 7 Habits Of Highly Effective People‘ – David has worked with with some of the most inspirational and innovative leaders, teams, educational institutes and organisations on the planet. These include Apple, Google and BSkyB to Médecins San Frontières, IDEO, Animals Asia and both the Finnish and Swedish schools systems.

As an artist, his works have been heard from New York Fashion Week and The BBC to concerts at The Royal Albert Hall, and have been used to influence community change on a global scale. He regularly collaborates with other celebrated performers, artists and pioneering figures of real change and is passionate about the place and power of art to make a hugely positive difference in the world. His songs ‘ LionHearts’ and ‘Children Of The Sun ’ from his 2015 album SPARK are currently being used by the global ‘One United Roar’ movement to put pressure on governments worldwide to ban the trade of canned and trophy hunting of animals in South Africa. In the Autumn of 2015, David also wrote, produced and directed a community concert of SPARK in his hometown of Derby, featuring over 100 local musicians and schoolchildren performing alongside singing stars from the Disney Movie and West End Musical ‘The Lion King’. Community change was ignited.

Whether addressing students, teachers, senior staff or award attendees, one of the truly unique things about David is his ability to synthesise his huge wealth of performance excellence on stage, camera and studio. In doing so, he has gone on to inspire and help tens of thousands of individuals, teams, organisations and communities all over the world to sustain meaningful change. He covers many theme options including;

-Improving Maths and Literacy By Embracing Music and Art

“The way that David engaged with the audience of students, staff and dignitaries was superb. The way he used music and performance to inspire is nothing short of breathtaking. It was funny, passionate, hard-hitting but more than anything authentic. He lifted horizons, let everyone know that it’s OK to be who they are, OK to not know and that we can all fulfil our potential if we focus on what really matters most to us. Amazing.”

“There are no words to describe what was achieved in the three days spent here. The infectious, passionate and authentic approach with the students was mesmerising. To see how Frank, a child that no other teacher had been able to engage with at all really, smiled and opened up to David when he suggested he have a go on the drums brought tears to the eyes. The students are still talking about the show and it was six months ago. Truly life changing stuff.”

“What a great session. We were able to have entirely open, honest, powerful dialogue that moved us firstly to resolution and then collaboration.”

“I would have no hesitation in recommending the event to other schools. The event achieved more in one day than I could possibly have imagined, and I was hugely impressed with the calibre of people in the team, which no doubt led to the event having the impact it did.”

“Whether it’s his stunning performances, songs and scores or it’s in the way he uses the metaphors of music to help people and organisations all over the world create real change in their lives, David and his music change people. He really is unique.”

“David’s powerful, inspirational and challenging master class caused me to have a huge shift. He has completely changed my mindset for the better. I’ll never be the same again”

“The work with David has transformed my approach to the challenges of our sector. I have been impressed not only with his methodology but also the way he keeps us all on track resulting in clarity of process as well as of thought. Fantastic!"

“David’s keynote was electrifying. The response from the delegates has been overwhelmingly positive and they loved his philosophies and real-world experience of change, of performance and of ‘executing on ‘that which matters most’. Absolutely Brilliant."

"The event on Wednesday was a real success. David Chabeaux was engaging, inspirational and thought provoking. He really addressed some key issues and highlighted some problems leaders are faced with and effective ways of addressing them. Alongside his important and serious messages, David was also very entertaining, which created a good atmosphere for colleagues to relax and work together."

"I would like to thank you for your participation in our recent DAPH 2017 Annual School Leadership Conference in the capacity of Keynote Speaker. Early feedback from delegates has noted that there were thought-provoking concepts and ideas on creativity that would be interesting to explore further. Comments include ‘we will change how we approach leadership’; the presentation included some really good nuggets to take away’ and ‘a lot of what David said resonated with me’....Thank you once again for all the time and effort involved in your contribution and for helping to make the event such a success."