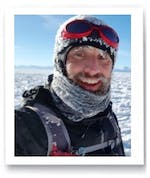 Darren hopes to encourage ordinary people to achieve extraordinary things. Life isn't about having more, it's about being more!

Ultra-marathon runner and worldly adventurer, Darren wows his audiences with stories from his epic desert crossings, world-first jungle expeditions and a 100-mile run across a giant frozen lake in Outer Mongolia where he sat eating wild boar as wolves howled from the treeline a few feet away.


When a car accident damaged his back several years ago, it gave Darren a stark reminder of how fragile life is, he set out to challenge himself to not only overcome injury but to excel at something he loved.

Darren has since raced some of the toughest ultra-marathons in the world up to 250 miles long, over mountains, deserts, jungles and in arctic conditions. He has completed several world-first crossings encountering wolves, snakes, hyenas and indigenous tribes as he ventured through uncertain territories.

Things don’t always go to plan when pushing your extremes and Darren shares gory and funny stories, from nursing a machete wound throughout a 200km jungle trek, to running a 250-mile mountain race with a broken foot. Darren has needed to be “stupidly stubborn” at times and be mentally prepared to push on through the hardest of times.

He demonstrated true grit when he was one of only 3 of 600 entrants to complete a series of challenges at the hands of the SAS and Royal Marines, including sleep, food and water deprivation, carrying 75lb packs over mountains, mind games, interrogations, stress positions and a 140ft leap of faith into darkness. Despite not being the fastest or strongest in a crowd, his determination and defiance prove the power of mental strength and a winning mindset.

Darren has featured in and on the cover of national running magazines, representing iconic sports brands, giving training and kit advice, and as an inspiring keynote speaker for events across the country has twice been invited to share his experiences at Buckingham and St James’ Palace and present the Duke of Edinburgh Awards alongside Prince Edward the Earl of Wessex.

When not trekking across the globe, Darren is a father, a property developer and entrepreneur, he is a trustee and patron of two local charities one of which works closely with the Duke of Edinburgh Awards, the other supports and rehabilitates children battling brain cancer.

Darren’s talks inspire and motivate audiences of all ages to push their limits, find their purpose and chase their wildest dreams.

"The talk was fantastic- thank you. The PowerPoint presentation that Darren prepared went down really well and we had lots of learners who waited after the talk had taken place to find out more information from him about his journey which Darren was very accommodating of ????"

“It was a really important day for me. As the first Speech Day as Headmaster, every thing I said and the organisation of the event was under scrutiny. With that being said, you did a wonderful job. Keeping the children and adults entertained in the way that you did was great. The content of your talk was interesting, inspiring and you made it suitable for all ages. All feedback from parents was good and I got some kudos for booking you which is even better! Hopefully our paths will cross again at some point soon.”

"Darren was excellent last week, many thanks. He spoke with passion and it was excellent to have time with him beforehand as this allowed him to tailor what he said to the audience. He provided us with some great video and images that also helped to engage the students and illustrate what he was telling them about."

"As a guest speaker on our NCS courses; the group listened attentively as he talked them through his various exploits as an extreme adventurer and charity fundraiser. His stories of completing the Marathon De Sable and spending a week alongside Sir Ranulph Fiennes as he became the oldest UK citizen to complete the challenge, held his audience spellbound. A true motivational speaker."

“Darren it was a pleasure to have you at our Duke of Edinburgh Awards Presentation evening, you enthused parents, students and staff with your extreme adventure stories and the challenges you have undertook over the past few years. The talk was motivational and inspirational to our students. ‘Take the next step’ is a powerful statement that linked superbly with our push on having a ‘Growth Mind-set’ something at the Academy we are instilling into our students on a daily basis, to move to the next challenge. Great stuff.”

"Darren was guest speaker at our D of E presentation evening for young people from across Peterborough. He was a inspiring speaker, his thirst for taking on new challenges and being able to overcome adversity fits in perfectly with the D of E ethos. He kept his audience engaged throughout."

"As a guest speaker Darren is a true inspiration to all. His approach to challenge, personal development and lifelong learning made him the perfect guest speaker to inspire and motivate our team. His adventures are the perfect hook to get the young people engage and his subtle but targeted “suggestions” on personal development stayed with the team throughout the twelve week programme."

“Darren attended the DofE Gold Award presentation at St James’s Palace on 14th December 2016, presenting to 93 Gold Award holders and their guests from the Central England region. Darren gave an enthusiastic and motivational talk, proving to be relatable and engaging. He was happy to participate in all the ensuing photographs and took time to engage with the young people when presenting their certificates. The day was enjoyed by all involved.”