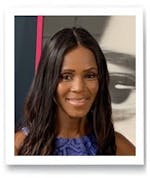 Chika Russell is an international entrepreneur, mentor and speaker. After 10 years working in finance and banking and qualifying as a management accountant, she went on to launch Chika’s.

The Chika’s range of African-inspired, boldly-flavoured snacks proved mainstream consumer demand for African foods that immediately struck a chord with retailers like Wholefoods, Waitrose, Holland & Barrett’s and Ocado and established Chika’s as the leader in this space.

In 2015, Chika Russell took part in BBC’s Dragons Den and gave what Deborah Meaden described as one of the best pitches ever. The battle between the 5 Dragons for a stake in the business was the most watched episode of the whole series.

In a short period Chika Russell has grown her business with over 1,000 retail stockists in the UK and internationally with airlines and hotels. In July 2016, she launched a revolutionary snack subscription box in partnership with the charity SOS Children with the bold aim of supporting thousands of African children through education.

Chika is passionate about educating women and is a partner to Worldvision in their Empowering Girls program. She is a founding member of the Conduit Club, which works to develop and promote positive social impact.

Chika has also represented female-led SMEs at 10 Downing Street’s Women in Business events. In 2019 Chika was selected as one of the Top 30 Inspiring UK Entrepreneurs by Business Leader. She has also been recognised as a ‘Consumer Business Rising Star’ by the Black British Business Awards Chika Russell is a frequent business speaker and she was recognised by She Leads Africa for her contribution as a female African entrepreneur.

“Chika was fantastic! Thank you so much for making the recommendation and for helping to arrange it. A really great start to our new school year and wonderful to be able to have her in school with us.”

“Thank you to the amazing speaker Chika Russell”