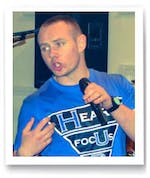 After Cameron's poor GCSEs, the future wasn't looking bright. However, with a change of mentality, Cameron now understands the importance of education

Cameron Parker is currently the Co-Founder and CEO of the motivational lifestyle brand ‘Hungry.Under.Dogs.’ Cameron is also working towards obtaining his degree in Business.

Going through school he never understood the importance of education. He always had the mentality that school wasn’t for him, and therefore didn’t show much interest. After graduating from secondary school, Cameron was unsure of what he wanted to do with his life, resulting in him getting involved in the wrong scene with the wrong people.

Cameron turned around his education in college and achieved the best grades available to him despite discovering he had dyslexia and ADHD.

He received a place on the Great Britain American Football squad, however, he never got his scholarship to the states that he wanted so much, despite this being something he had put his blood, sweat, and tears into. Looking back now he describes not going to America as a “blessing in disguise” because he feels he has bigger and better dreams he is pursuing.

Cameron believes his poor GCSE’s were partially the reason he did not receive a scholarship to the United States. After his experience in college he finally values the importance of education, therefore he is trying to pass on his lessons to make sure the youth do not make the same mistakes as him. If there is one thing he is truly passionate about, it is helping and making a difference to people’s lives.

"Cameron was brilliant! The students were completely engaged and his messaging was exactly as we wanted. Lots of students have commented on it being the ‘best assembly’ they have ever had. We will definitely be using him for future Y11 groups."

“Cameron was a fantastic speaker who really engaged with the young people. They were transfixed for the entire session and had so many questions for him afterwards: it was a really rewarding afternoon for all involved. I would have no hesitation in contacting school speakers again.”

“Cameron speaks their language and can communicate exquisitely in a way that compels the listener to personally apply lessons from his life to their own context. As a young speaker Cameron brings a clarity of thought rarely seen and I highly recommend him."

“The presentation was fantastic – the students were absolutely captivated by him! Nothing but positive feedback came from the students and staff that attended”.

“This is a man that warms the heart with his sincerity and offers hope to the hopeless through his inspiring words. Cameron is the man to watch!”

"Cameron was a huge success. The students loved him and are full of praise. The staff who went to the event also spoke very highly of him and how inspirational he was. We are hoping to include him in next year’s event. Thank you"