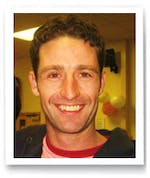 Ben is one of the UK’s leading climbers, having been climbing full-time for over 20 years. He is world-renowned for his bold climbing on routes at the cutting edge of the sport, including his impressive exploits on big wall expeditions around the globe. Born and bred in Snowdonia, Ben graduated from the University of Birmingham (BSc with honours in Sports & Exercise Science) in 1996, before moving to Sheffield, where he has lived ever since. Over the past ten years he has given over 500 inspirational talks in 15 countries.

In his presentation Ben describes the first free-climbed ascent of the 1000m Angel Falls wall, the world's highest waterfall, in 2005. The team's successful expedition, with climbing at the highest level, in an incredibly remote region of the planet, was praised as 'one of the finest achievements by British rock climbers on foreign soil'. Situated in the heart of the Venezuelan jungle, this is not merely a story about an audacious rock climb on one of the Natural Wonders of the World, but the emotions and experiences encountered along the way.

Ben's presentation covers the whole adventure, including the 6 day journey to their base camp, the amazing flora and fauna found in the unique Tepuis (the area that inspired Sir Arthur Conan Doyle's novel 'The Lost World'), as well as a look at 'life on the edge’ - they spent 14 consecutive nights sleeping on portaledges - hanging beds - suspended from the overhanging wall.

Together, the story, stunning photography, insightful video clips and, above all, Ben’s enthusiastic delivery, the presentation is sure to captivate any audience. It demonstrates that, with hard work, focus, planning & preparation, teamwork, positive thinking and a determination to succeed, any goal is attainable, encouraging others to live their own lives to their potential.

"The event was great - all went well, thank you!"

"It was wonderful to have someone deliver something which had such a positive, and real impact on the pupils, leaving them truly inspired! I hope to see you again in the future."

"Just wanted to send you a quick message to say how inspired the children (and adults!) were as a result of your visit today. We had parents evening tonight and thought you would find it of interest that so many parents commented on what a great day their children had learning from you. So many of them stated that they would have loved to have been there themselves, showing how enthusiastic the children must have been when telling their parents about their day."

"This was the third year we had Ben in our school to talk to our Y6 children, and once again he didn’t disappoint. The children thoroughly enjoyed looking at his wonderful photos and video clips, and listening to his tales. He linked his talk brilliantly to our topic 'Climb Every Mountain' and was extremely inspirational to everyone. The excitement and genuine interest of the children was evident, through the Q & A session that followed. Thank you Ben, and see you next year!"

"Thank you so much for visiting us (for your 3rd time) and giving such a brilliant talk today. As I said, it is the first time I have seen students gather round the speaker at the end and ask for selfies! Thank you again, it was inspiring for us all."

"Ben’s talk was warmly received by our students and staff. He was assured, confident and extremely well prepared. He pitched his talk at just the right level for my students and his experiences really captured the imagination of the students. We are all looking forward to finding out about his future adventures."

"Ben's true strength is judging his audience and pitching his lectures accordingly. It was Ben's second lecture at Colfe's and the students' found his story engaging, uplifting, humorous and thought-provoking. The talk is supported with stunning visuals which kept our Year 12's hooked throughout."

"A huge thank you for presenting awards and for being our guest speaker last night. You were hugely inspirational and absolutely reinforced our motto 'Success Through Effort'."

"As the role of Headteacher continues to be a very challenging one, we all benefitted greatly from the refreshing sense of awe and wonder that your presentation was able to provide. The photography was stunning and your fluent and good-humoured exposition kept us all engrossed. Your adventures remained a real talking point for the rest for the two-day course."

"Thank you so much for your talk yesterday morning. It was just what we’d asked for in the brief. The narrative you shared with our students, all the way from Year 7 through to Year 12 will be fantastic in helping us to hang the messages we want to share with them on to during the next few days and beyond. Good luck with your next expedition and I hope that your shoulder improves quickly."