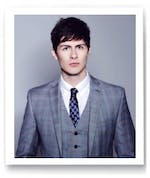 ITV Magician inspiring students to find their own magic in life

Ben Hanlin is the star of his hit ITV2 show ‘Tricked’, tricking unsuspecting members of the public and shocking celebrities with his own special brand of cheeky magic close-up conjuring and mind games Candid Camera-style. Tricked had viewing figures of over 1.7m per show.

Ben has starred in the world’s best-selling touring show ‘The Illusionists’ and recently appeared on ITV1’s ‘Live at the Palladium’. He became an overnight sensation debuting his incredible tricks as Magic Boy on You Tube, Ben now has over 900,000 views! He has performed tricks on celebrities including Kim Kardashian, Sharon Osbourne and Gary Barlow.

The fusion of magic and comedy is what makes Ben so different and successful. He’s able to produce astounding large-scale illusions or highly detailed close-up magic, all with his unique sense of humour. Ben’s corporate stage magic show is jaw-dropping playful, fresh and laughout-loud funny. There are lots of moments of audience interaction and Ben’s friendly manner makes a show where you needn’t be anxious about putting your hand up and taking part. Usually ranging between 20-30 minutes, Ben will often perform approximately 5 - 7 tricks in that time.

Opener
Ben produces ANY liquid the audience wants from a sealed can of coke!

Impossible Card Swap
This is one of the funniest routines in the show because Ben links it to the first time he used magic to win over a girl. For this re-enactment he calls upon a male audience member to join him on stage to play the part of the girl. Ben makes them the star of the trick, much to the audience’s amusement.

Mind Reading
Ben asks someone to think of ANY movie and just by a few basic observations Ben is able to tell them the exact film they are thinking of!

The Entire Audience Become Magicians
Once again the entire audience is involved and the trick uses four photos. The four photos are bespoke to each event which gives the feeling it has been created especially for that specific audience. This is one of the tricks that people will be talking about for a long time to come because every member of the audience has been involved in the magic.

Finale
This is a dangerous stunt that not many magicians will often attempt. For Ben this trick has pretty much changed his life. He briefly explains how he had to become a street performer to pay his bills and it was this trick that he would perform up to fifteen times a day for a couple years in order to keep himself going.

Encore
Ben gets the audience to create a random 8-digit number. He then reveals that before the show had started he knew that tonight’s audience would come up with exactly this number!

Apart from appearing in three series of his own TV Show, Tricked, on ITV2, Ben has TV appearances including Celebrity Juice, Live at the Palladium, BBC Breakfast, This Morning, Good Morning Britain and Soccer AM.

"Ben Hanlin is a friend of Warwick School and is currently making a major name for himself in the world of magic. He recently returned to school to speak to my Lower Sixth about their career ambitions and brilliantly succeeded in interspersing magic and easy going good humour with some remarkably valuable advice about career ambitions, goal setting and personal fulfilment. The students were fascinated by what he had to say and, given Ben's youth and enthusiasm, i have no doubt that his advice had a particular resonance with them. Ben's presentation will certainly become a regular feature of our Sixth Form calendar and I would have no hesitation in recommending his presentation to any school that wishes to energise their older students and give them a greater sense of focus and self confidence".

"Ben delivered a fantastic show at the Inchcape Leaders event in Brussels, he kept a room that included 62 Nationalities, transfixed through out, he had wonderful natural engagement with the audience who were bamboozled by his illusions, most impressively the show was tailored around key company members and brought the house down”

"We hired Ben and received some of the best feedback ever (and I mean, ever!). His ability to work with the audience was totally brilliant. I still cannot get my head around how he turned 250 people, into magicians! He is very special and so easy to work with.”

“Ben has hosted our finals a number of times. With over one thousand people in attendance, his great energy and incredible magic make him a hit every year!”